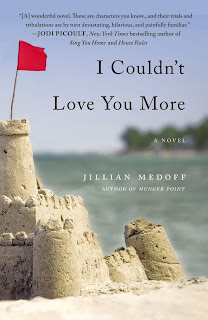 Jillian Medoff's I Couldn't Love You More is an emotional yet often humorous story about choices, consequences, forgiveness and family.

Eliot Gordon is happily plugging away at life in Atlanta as a mom to an adorable four-year-old, bonus mom to two other daughters and a committed partner to Grant Delaney. Kept busy with her own family and job, she also enjoys a close-knit relationship with her two sisters and mother. Even though Grant's ex-wife proves a challenge to their lives and Eliot no longer speaks to her father, she is basically content.

Everything changes when Eliot's college boyfriend Finn Montgomery returns after more than ten years away in New York City. Even though he is married and has a daughter, and she is basically married with three, part of her never forgot and always wonders about the man who got away. The two reconnect with secret coffee meetings and phone calls, which causes Eliot to have conflicting emotions about the two men in her life.

Before their rekindled friendship turns into an affair, personal tragedy strikes when the unthinkable happens during a family vacation to the coast. In the aftermath, Eliot must face the guilt and consequences that came from her error in judgement. As the family heals together, Eliot closely examines her life and what changes she must make to move on.

The greatest strength in Medoff's story comes from the development and exploration of Eliot's family. The interactions between the two sets of three sisters (Eliot and her sisters, and Eliot's daughter and step-daughters) are believable to anyone who has a sister. They fight, they nag, they drive each other crazy, but at the core they love each other -- no matter what.

The men in the story were also interesting to read. It was possible to see the appeal of Grant and Finn, while also wanting to sometimes shake Eliot for putting up with either one of them. Such is life with men. Anyone who has found contentment in their present, but also still wonders about the man from the past, will be able to relate to Eliot's struggle. While I may not have always agreed with Eliot's actions or decisions, I could understand why she made them thanks to the effective story-telling.

The story also explored the relationship between mothers and fathers and their children. Through these interactions, Medoff shows that blood will always tie a family together. More importantly, she shows that love is the most important element of a family. The story shows that being a parent and a family is about caring for the others and loving them, no matter what.

Aside from the compelling family element, the story delves into choices, consequences and forgiveness in an entertaining and easy-to-read format. If you are looking for a book that will humor, suspend and make you tear up, this book is for you.


Be sure to check back tomorrow for my interview with the author.

The eldest daughter of a traveling salesman, Jillian moved 17 times by age 17, ultimately ending up in Atlanta, where her new novel is set. She has a BA from Barnard and an MFA from NYU, and is grateful for having studied with such luminary writers as Mona Simpson, Jonathan Dee, Robert Coover, and Alice Walker. She also attended Master Classes with Toni Morrison, Joyce Carol Oates, and Grace Paley. Although each author continues to influence her work in powerful and diverse ways, she suspects few of them, if any, remember her. A former fellow at the MacDowell Colony, Blue Mountain Center, VCCA and Fundacion Valparaiso in Spain, Jillian taught at NYU and the University of Georgia, but for only, like, five minutes.

You can read more about her books at www.jillianmedoff.com. She currently lives in New York with her family, and has no plans to move anytime soon.