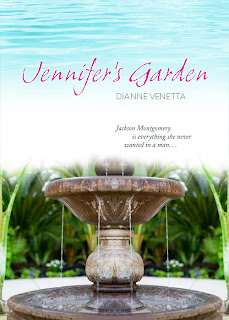 In Dianne Venetta's Jennifer's Garden, the title character's life undergoes significant changes and turmoil as she faces the loss of one life and the beginning of another.

Cardiologist Jennifer Hamilton's mother is dying. As she copes with the grief of the impending loss, she is determined to give her mother one last gift: the joy of seeing her married well and settled. Though she does not have strong feelings for her future husband, he looks well on paper, which is good enough for her, even though her friends object. In preparation for her big day to tie the knot, she hires a gardener to reform her backyard in time for her nuptials.

Enter Jackson Montgomery, the sexy man in charge of turning her garden into a paradise. Though not the kind of man on the checklist she has carried around forever, he makes an impression on Jennifer. Before long, Jax and Jennifer are sharing more than a difference of opinion on life and love, but a mutual romance.

Though a little slow to start, Jennifer's Garden soon became a fast-paced and engaging read with enjoyable characters who held my interest through the end.

Jennifer undergoes significant transformation in her personal and professional life to find happiness. Even as she deals with serious heartache, she learns to cope in a lovely way. It took me a while to develop a connection to Jennifer, but once I did, I really found myself cheering for her.

Jax was a delicious male lead, and one I found myself crushing on early in the story. He is a good match for Jennifer and a delight to follow on his own journey of change and growth. Though initially rude to him, Jax turns out to play an important role in Jennifer's transformation.

The relationships between Jennifer and her mother and Jennifer and her best friend are also a strength in the story. Both women have a huge part in her life, and she values their input more than anyone else. She may not always listen to their advice, but in the end, she ultimately follows it.

A good blend of sadness and romance, Jennifer's Garden was worth the read, and I look forward to seeing the characters again in Love on the Rocks, another book in the series, which I will review in July.

About the Author
Dianne Venetta lives in Central Florida with her husband and two children -- and her part-time Yellow Lab (Cody!). An avid gardener, she spends her spare time growing organic vegetables. Surprised by the amazing discoveries she finds there every day, she wondered, "Who knew there were so many similarities between men and plants?" What began as a brief hiatus from writing has blossomed into an ever-expanding home garden and blog at BloominThyme.com -- stop by and share some tips! When she's not knee-deep in dirt or romance, Dianne contributes garden advice (challenged!) for various websites (a crazy existence to be sure). But at the end of the day, if she can inspire someone to stop and smell the roses -- or rosemary! -- kiss their child and spouse good-night, be kind to a neighbor and Mother Earth, then she's done all right.