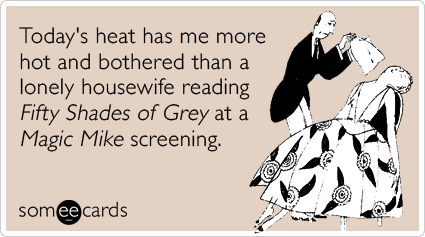 If you follow me on Facebook or Twitter, then by now you know I am crazy excited to see Magic Mike, tonight, with a few of my girlfriends.

For those of you who do not know, Magic Mike is the story of an aspiring entrepreneur willing to do whatever it takes to fulfill his dreams. At the same time, he is taking a younger man under his wing to show him a new world of professional opportunities in the meantime, while falling in love with a sassy woman.

OK, so that might be the explanation I gave my father if I still lived at home and needed his permission to see a movie.While all of that is true, I left out a few key details, like the fact that the man, Magic Mike, is a talented male stripper who aspires to build custom furniture, and he is mentoring a new co-worker in the art of striping.

In all seriousness, the movie has received fairly positive reviews, especially when people keep in mind that this is not Casablanca or Titanic. It is a summer movie about hot men at work.

With that in mind, a lot of people have been making comparisons to the Fifty Shades trilogy. While I don't see what they have in common (one has strippers and the other has kinky sex) aside from being super sexy, I still figured this was a good opportunity to revisit some of my favorite Reading in the Kitchen recipes. 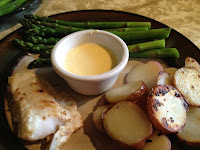 In book one, the elusive Mr. Grey takes the innocent (well, basically by this point) Ana out for a private dinner at his home. The sexy dish sets the mood, but she still manages to stand her ground and put off the man who made her such an indecent proposal.

By book two, all thoughts of abandoning the stud are gone, and Ana has embraced their relationship, though on different terms. Again, Grey takes her for a romantic dinner, but this time it sets the mood for a delightful post-meal... engagement. After an unpleasant morning filled with a run-in with one of Christian's exes and the threat of stalking -- or worse -- from another, Ana does what any good little pseudo-sub will do: she makes her dom something to eat.

With Beyonce on the speakers and a whisk in her hand, Ana whips up this concoction, yielding the best compliment a girl can get from a man when Grey says its good.

This delicious meal might be my favorite. Who am I kidding? We all know I loved the cake and booze best. But this one is a meal I'm still thinking about more than a month later. I should make it again, soon. 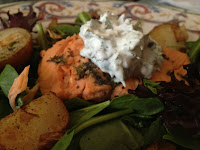 This is another meal Ana puts together for her man, though under different circumstances. After a morning romp in the red room of pain (playroom), Ana creates a nutritious and well-balanced meal of watercress salad, poached salmon, boiled eggs and a fancy little dip to top it all off.

That girl is a serious overachiever.

Light and fresh, this is probably the most perfect summer meal of these dishes. It will cool you down and offer you important nutrients for resuming activities. *wink* 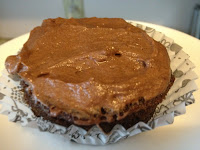 If Christian Grey was my overly protective, brooding, but ridiculously sexy boyfriend, I would bake him a cake for every hour of the day to celebrate his birth. Granted, the cakes would probably come from a box, and I might even be tempted to bakery order some of the later ones, because a girl can only spend so much time barefoot in the kitchen.

Still, his really lady love managed to upstage me when she baked him one fantastic homemade cake with expensive designer chocolate frosting. What a jerk! 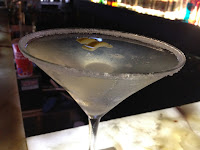 Sometimes a girl has to make a stand and put another woman in her place.

Sometimes doing that involves throwing a drink in said bitch's face. And just like Ana, this drink gave me a bit of a buzz before having to toss it, so it is really a win-win for everyone involved. Well, maybe not the person on the receiving end, or the maid who had to clean it up. But it sure was a win-win for the tosser.

I can vouch for all of these dishes. They are delicious and amazing. I encourage you to try any of them out tonight.

For my part, I'm going to grab a place in line for tonight's screening of Magic Mike. I'd hate to lose even a moment of Channing Tatum searching his soul... or showing off his abs.

Email ThisBlogThis!Share to TwitterShare to FacebookShare to Pinterest
Labels: 2012, kitchen