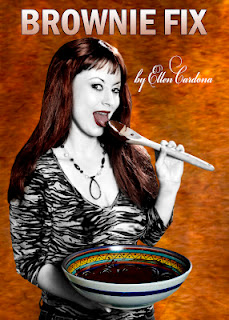 Persey has a wonderful husband who loves her, and the two of them are about to become parents. Excited to have her child, Persey is still coping from a miscarriage from the year before. Enter the voices that nag at her, and the overwhelming urge to gorge on unbaked brownie mix -- made with a manic and methodical process -- which leads to guilt from the added pounds, and she is not entirely in her right mind.

After giving birth to her son, Ryan, the inner turmoil gets worst as she develops almost immediate postpartum depression.

Though she loves her son and wants to be a perfect mother, she also finds it difficult to completely bond and care for him.

Throw in a cast of kookie extras, visions of a yellow-toothed man and ghosts from her past, and Persey's everyday life is struggle. With the support of her husband and loved ones, she learns to deal and finds peace of mind.

Emotional and raw, Brownie Fix was sometimes difficult for me to read -- but in a good way. Persey's angst and struggle was so well portrayed I felt uncomfortable and tense throughout most of the book. As her thoughts become frantic and jumbled, so did my thoughts. That was solid writing on Cardona's part.

Despite the tension I felt most of the time, the book was well-paced, which made it a quick read.

The book succeeds at giving hope in the midst of all the conflict. Even though Persey is losing it, she also hangs on to a desire to succeed. Unfortunately, that very desire often creates more problem for her. She also has the love and support of her husband -- who seems like the kind of guy most women would want to have a baby with. He understands that all is not well with her and tries to help the best he can, even though she keeps the details of her struggle hidden from him.

Written to help her overcome postpartum depression, Cardona's novel sheds light on sad and difficult sides of depression, in a straight-forward way. At the same time, some of Persey and company's antics are so funny or bizarre, I often found myself laughing out loud moments after cringing.

Brownie Fix is a great read for moms and non-moms alike.

Check back tomorrow to read a guest post from the author.

Everyone who leaves a comment on the Chick Lit Plus tour page will be entered to win a $10 Amazon gift card. Anyone who purchases their copy of Brownie Fix before July 30 and sends their receipt to Samantha (at) ChickLitPlus (dot) com, will get five bonus entries.

When Ellen is not writing, she teaches literature to college freshmen and attempts to help them understand the writing process, though they think she’s crazy because of her love for literature and writing.

Ellen graduated from the University of Texas at Dallas with a PhD in Humanities with a specialization in Literature. Even though she has published several academic works on Ezra Pound, she could not ignore her true passion as a fiction writer.

Ellen lives in Richardson, Texas, and continues to learn daily from her husband and two children. In good times and bad, she still enjoys her brownies.