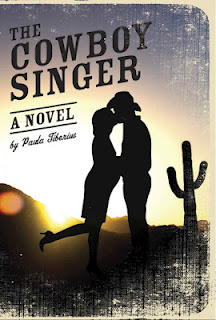 An aspiring actress' career is cut short before she hits it big when she finds herself pregnant and moves home to Austin in Paula Tiberius' The Cowboy Singer.

After April Connors' boyfriend leaves her when she is six months pregnant, she moves in with her grandmother while she awaits the birth of her son. Barely settled, her best friend introduces her to James, the lead singer of Jimmy Wick and the flames, a hot band in country music. James is recently single upon going through a bitter divorce, and still fights with his ex for more custody of their daughter, Summer.

Sparks fly when April and Jimmy meet, though both are hesitant to act on them, figuring they are both damaged goods who need to figure out their lives before delving into a relationship. Still, they embark on a friendship that gives April the support she needs when her son, Avery, is born and when his ex-wife uproots their daughter to move to Orlando.

Eventually, their friendship turns romance and romance to love, while both try to determine their future as a couple.

This was a ridiculously cute book. I took it on a recent vacation with me, and it was the perfect story to read before going to bed at night and at stolen moments during the day. There is a particular moment toward the end of the book involving a cowboy writing a song for his best girl that I quite enjoyed. (I have said it before, and it will probably always be true: I am a sucker for a man writing a song for the girl he loves.)

The story, though not completely ground breaking or Earth shattering, was still developed well enough and told well. Tiberius captured the essence of the Austin scene without being weighed down with unimportant details or unrelated plot elements.

As far as characters go, April was likeable enough, but my favorite character by far was the title cowboy singer. At one point, while reading the story, I turned to my mom and said, "I am going to marry a country singer/producer." He makes men look good, by being a hands on father and a positive male influence for April's son. Also, he is just plain adorable and totally crushable.

April's baby daddy and James baby mama are also good secondary characters. Despite being moderate villains in the story, Tiberius also gives them enough development to show that even though they create obstacles for the main characters, they are not evil. They have their own interests they are trying to protect, which does not justify all of their actions, but makes them more human.

Tiberius also sets us up for a potential spin-off with James brother, a hunky rancher looking for love. I know I would not mind wrangling that cowboy, if you know what I mean.

I enjoyed the Cowboy Singer and recommend it for anyone looking for a quick romance that leaves you satisfied.

Check back tomorrow to read an interview with Paula Tiberius.

Paula Tiberius is an author, screenwriter, filmmaker, musician and mom living in North Hollywood, California with her musician husband Richard, their daughter Violet, and their German Shepherd, Jackson. Paula wrote and directed the award-winning feature film Goldirocks in Toronto, which came out theatrically in 2004, played on Pay TV and Cable in Canada and is currently available on Netflix, distributed by R Squared Films. To learn more about Goldirocks, visit www.goldirocks.com You can read more from Paula Tiberius at her website  www.paulatiberius.com/blog, where you’ll find lots of thought-provoking blogs, vegetarian recipes and more. The Cowboy Singer is her first novel.