book review: lust on the rocks 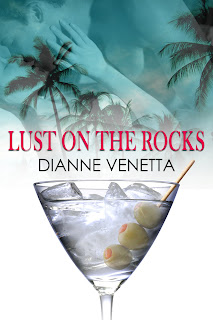 The courtroom gets sexy in Dianne Venetta's Lust on the Rocks. Tasked with winning a major case in the hoped of earning partnership at her law firm, Samantha Rawlings is focused on her career and determined to succeed. A wrench is thrown in her well-oiled machine when a new addition to the law firm is assigned to the case, too.

More frustrating than that is the fact that Sam finds herself attracted to Victor Marin. It isn't long before the two are mixing business with pleasure, only to complicate it with unplanned emotions.

Their lives grow more complicated when a secret from Vic's past threatens to compromise their case.

I had a tough time getting through this one. Though the story started fast enough, later parts dragged a little for me. Though entertaining, I found myself wishing it would hurry up occasionally.

In all fairness, it might have a little to do with a certain development about a quarter of the way through.

Forgive me while I indulge on an insane tangent. I'm no prude -- romance novels have graced my shelves since I was 12, and I devoured the Fifty Shades books during a longish weekend -- but I did find myself quite shocked once Sam and Vic made it to the bedroom. For one thing, these two are entirely too chatty in bed. I prefer less, "What's your fantasy?" and more action. I don't know why, but dirty talk in fiction makes me feel like I'm being invasive to a private moment (as if straight sex isn't intimate enough). If you like that, then you'll love this book, because Venetta does this well.

Even this would not have stuck out so much if Vic had not committed a serious faux pas. He named his penis. I was still giggling uncontrollably (in public, mind you) when the name registered with me. Vic's penis has the same name as my friend's boyfriend. Do you know how challenging it is to read a sex scene once you have that in your head?

Compared to Jennifer's Garden, the main protagonist in this story is seemingly stronger and more confident. Until she develops self doubt and questions her life plan thanks to her new man. Watching her falter a little and build herself back up was enjoyable to watch.

I also liked that Vic is a younger man who is subordinate to her at work. As a future cougar (I plan to marry Josh Hutcherson, who is six years younger than me), it is a welcome twist to have a female lead in power, both in age and career. Though it raises a bit of an issue, in the grand scheme other factors are ultimately play a bigger role in complicating their relationship.

The plot was also interesting, and the author developed the case at the core of the book well. She seemed comfortable with the legal jargon and lawyer talk, which made the story more believable.

Overall, Lust on the Rocks was an entertaining read, and a solid sequel to the previous book in the series.

About the Author
Dianne Venetta lives in Central Florida with her husband and two children -- and her part-time Yellow Lab (Cody!). An avid gardener, she spends her spare time growing organic vegetables. Surprised by the amazing discoveries she finds there every day, she wondered, "Who knew there were so many similarities between men and plants?" What began as a brief hiatus from writing has blossomed into an ever-expanding home garden and blog at BloominThyme.com -- stop by and share some tips! When she's not knee-deep in dirt or romance, Dianne contributes garden advice (challenged!) for various websites (a crazy existence to be sure). But at the end of the day, if she can inspire someone to stop and smell the roses -- or rosemary! -- kiss their child and spouse good-night, be kind to a neighbor and Mother Earth, then she's done all right.