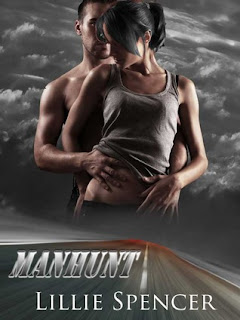 What if you woke up in a hospital bed wondering how you got there or why a strange man wants you to leave with him?

In Lillie Spencer's debut romantic suspense, Manhunt, Nikki Wright finds herself in that situation when Michael Brennan shows up at her bedside determined to get her out of the hospital as soon as possible. Unknown to her, Michael is her childhood friend turned boyfriend turned ex, but she inexplicably trusts him enough to go on the run with him.

Nikki soon learns she was hospitalized after being abused by Sebastian, another ex-boyfriend, who was found dead in her home. All signs point to Michael as the murderer, but still Nikki finds herself drawn to him, wanting to believe his intentions were good.

She slowly relearns her life and the circumstances that led to her present while they try to evade the police. At the same time, Michael and Nikki rekindle their romantic feelings toward each other while wondering if happily ever after is even in the cards for them.

One fact is for sure, nothing is what it seems by first appearances.

Manhunt starts fast and keeps moving at top speed until slowing toward the end, which was a good thing. I found myself so captivated in the story, I could not put it down and finished it in one sitting.

Though the main characters have a lot of history, the amnesia element ensured that those aspects were not revealed too quickly, which added to the suspense.

The characters were easy and enjoyable to follow. Michael was definitely crushable, and Nikki's plight had me captivated from the beginning. Their best friends and family members added to the intrigue, and I especially liked their friend Christian.

My only complaint as far as characters went was that there were a few good ones who we did not meet until late in the book. I would have preferred to see them introduced a little sooner so we could have bonded better, but it did not ruin the read by any means.

A solid read and an even more excellent debut, Manhunt is a great find for readers who enjoy their romance laced with mystery and intrigue.

As a side note, our heroine Lillie and I both share a love for baking, which means you can look for a Manhunt-inspired Reading in the Kitchen post soon.

About the Author
Lillie likes to joke that she is a mother, author, and wife - usually in that order. Although her background is in Wildlife Biology, writing has always been her passion. She was a teaching assistant for English Composition and English as a Second Language in college, and wrote countless stories in her free time before she was brave enough to submit one for publication. A preview of Manhunt was an editor's choice recipient at textnovel.com in 2009, where it is still No. 10 on their "Most Popular" list, and was a semi-finalist in the Dorchester Next Best Celler (sic)contest. Lillie was also recently awarded an Honorable Mention in the 2011 RWA-Passionate Ink's Stroke of Midnight competition for her work-in-progress, The Circle, a paranormal romance. When not writing or freezing at soccer games, Lillie loves to cook and play video games with her family.