Blogger's Note: Brownie Fix author Ellen Cardona visits Change the Word, today, as part of her Chick Lit Plus blog tour. She shares a little insight into the ups and downs of writing her debut novel. Ready my review of Brownie Fix here. 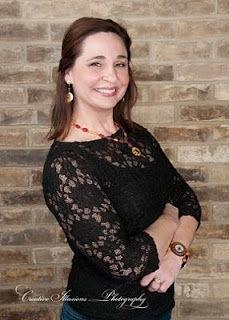 Brownie Fix was my first novel, and by far the hardest to write. My mentor, Robert Nelsen, said that your first book is going to be about yourself, no matter what. You’re going to be in there, in the book, somewhere. He was right.

I started writing Brownie Fix, even though I didn’t know it at the time, as short stories. As one of my last graduate classes, I signed up for Dr. Nelsen’s Short Story class even though I was absolutely terrified about writing. Why? It’s because I knew I was a writer, and I was scared that I would fail, and even worse, I was scared I would succeed.

The first story I wrote was absolutely hideous and surface. When I saw him in his office to go over the first story, I had already corrected and brought out some raw emotion. He said, “That’s it. Keep doing it.” Hence, Brownie Fix was born, but I didn’t know it at the time until I took another of his classes, Novel Writing, and realized that the short stories I wrote had a connection—they were about my inner turmoil, my demons. The link was that I had just had my first child, and I was suffering from postpartum depression, which spiraled into full-blown depression.

Brownie Fix is about my own experiences with postpartum depression, but the character and the plot are completely exaggerated because I couldn’t write a book on my own life—boring, boring, boring. What’s there that is not exaggerated is the raw emotion that is always in present in my writing. Women will either connect to main character, Persey, because they’ve felt the same frustrations she has had, or they will simply hate her because she is a mother, and she is not having a fun time with it. Hmmm.

Brownie Fix went through countless drafts because that’s what you do when you write a book... you get the first draft, and then you re-write, re-write, re-write. One thing I made sure is that I had strings that ran throughout the book that tied the plot together. These strings are symbols and actions that the readers can latch onto so that they’re not lost in the words. For example, brownies are a string that runs through the book, but the brownies are more than just brownies.

My second book, Raven’s Return, completely different and plot driven, is about the birth of a goddess. That idea came from a short story I wrote, called “Life of Brayden,” which was a haunting dream that I couldn’t get rid of even though I tried to push it aside. I turned it into a novel, which I hope will be out in the fall, which means it will be out in December.

My advice to anyone that wants to write a book is advice that you hear all the time: just keep writing and don’t give up. Books don’t write themselves, and there’s no muse to help you write... it’s just you. Keep at it.

About the Author
Ellen Cardona wrote Brownie Fix to help deal with the postpartum depression she experienced after one of her pregnancies. Through her writing, she found that postpartum depression was real but conquerable, especially when one has the help of some dark chocolate and even darker humor.

When Ellen is not writing, she teaches literature to college freshmen and attempts to help them understand the writing process, though they think she’s crazy because of her love for literature and writing.

Ellen graduated from the University of Texas at Dallas with a PhD in Humanities with a specialization in Literature. Even though she has published several academic works on Ezra Pound, she could not ignore her true passion as a fiction writer.

Ellen lives in Richardson, Texas, and continues to learn daily from her husband and two children. In good times and bad, she still enjoys her brownies.