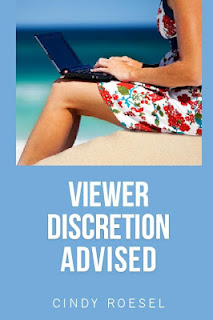 In Cindy Roesel's Viewer Discretion Advised, a news director makes a splashy debut in Miami, where high drama and action fills her life.

After losing her job at a TV station in Los Angeles, Charley Thomas takes a job in Miami hoping to add some spice to her life and to learn from the best in the industry. The best, who happens to be her new boss Jonathon Lefton. With his high demands and the always over-the-top on- and off-air talent, it does not take long before Charley feels the heat.

When one a nude photo scandal breaks out surrounding one of the TV anchors, it hits the fan. A frenzy of coverage and sensationalism ensues to ensure their station hits No. 1 in the ratings, while hoping to snag a few Emmys in the process.

With my background in print journalism, I found Charley's chaotic life relatable. Though print and broadcast differ, our lives often revolve around chasing ambulances and fires with hopes of landing the best local coverage and making a name for ourselves... Oh, and reporting the news along the way.

But even if I did not have my background in journalism, aspects of Charley's life our easy to understand -- the pressure to take a job in today's market, the need to do well at it, the challenge of balancing a personal and professional life. It is all there.

However, Charley's life seems a lot more exciting than anything I was ever part of in journalism. Not only does she spend her professional life uncovering police corruption and plane crashes in the Everglades, but her personal life has a lot of drama.

She has a maybe boyfriend who she loves, but won't say it, because he doesn't either. Only, he is a trust-fund baby who spends his days surfing and loving life (a little different from any men I've dated). Though they say their relationship is casual, it goes beyond that, though neither seems willing of taking their relationship to a deeper level, which adds another layer of intrigue.

Oz, the trust fund guy, is pretty adorable. Like a true gentleman, he tries to treat Charley nice, gives her support and manages to stay super sexy at the time. He is a great balance to her high-strung lifestyle.

The cast of characters in and around the newsroom and in Charley's life, combined with the high action, fast-paced writing, makes Viewer Discretion Advised a fun and entertaining read, I would recommend.