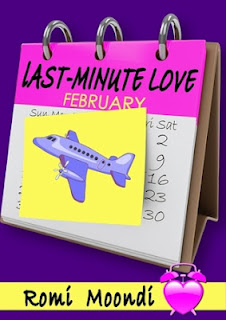 Romi Moondi's hilarious story-telling is back with Last Minute Love, the sequel to her equally entertaining Year of the Chick.

When we last saw Romi Narinda, she had just met the man she's been chatting up for a whirlwind day in New York City. Though she thinks she may have found Mr. Right, she still has to deal with those pesky parents who have big plans for her.

Here's the scoop on the book:


What's a girl to do when she meets the Internet man of her dreams, he's better than she expected, but he lives an ocean away? And let's not forget her parents,who are trying to lock her up in arranged-marriage doom...

In this fast-paced story of culture clash and romantic pursuits, there's a big fat Indian wedding, the struggle to keep a long-distance flame alive, and an unexpected mystery man who could set a new course in motion.

All the while, our heroine abandons what was once an all-consuming man-search, which helps her remember the person she used to be and the person she hopes to become; the history-loving nerd, the hopeless romantic and the emerging author with dreams of ditching the corporate rat race.

This is the book of living in the moment, making the grand gesture and putting it all on the line. This is when Romi Narindra comes alive...

Moondi has a strong and funny story-telling voice, which makes the story a fast-paced read. Even when faced with bad moments, Romi the character's quirky personality will have you laughing again within a few moments.

This time around, Romi spends less of her time looking for a man, like she did in Book One, and more looking to complete other parts of her life -- like her lackluster career in corporate Hell and following her ambitions to become the person she wants.


In the sequel, she continues to navigate the challenges that come with her constantly clashing world where she takes a more active role in the outcome, which is fun and empowering to watch unfold.

Aside from Romi Narinda, the other characters in this story add a decent amount of humor and drama.

If you are a fan of chick lit who enjoys watching a 20-something get her life together, Last Minute Love is a solid read.

Romi will be on the blog, tomorrow, for an interview, so be sure to check back.

I am Canadian, and here are some strange personal facts:

- I wore denim-top-to-bottom in high school (there is a direct inverse relationship between how much denim I wore and how few tongues were launched down my throat at school dances...or anywhere in high school at all).
- A homeless lady in New York once told me "You're just a bitch on vacation with no money!"
- I always hated those insufferable couples who would cuddle and make out on the subway... until I became half of one. But now I'm back to being none of one so I hate them again.

The thing I love most in the world is writing. When I first started publishing on Amazon it was my "crazy" humour side ("The Book of Awful," and "NOT Love Poems For Real Life"). Since then, everything has focused on my "Year of the Chick" series, because it's the most important thing to me in the world right now. I guess that would tend to happen, when your writing is inspired by real life, including all the satisfaction and risks that come from that.