book review: the not so secret emails of coco pinchard

A middle-aged woman's life undergoes significant transformation, and she logs it all with emails, in Robert Bryndza's The Not So Secret Emails of Coco Pinchard. 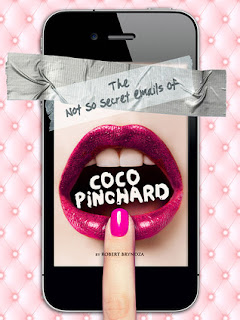 Where Bridget Jones left off... Coco Pinchard picks up.

Coco was never a single thirty-something. She married young, had a son, and put her dream to be a writer on hold.

Now her first novel is published. Husband Daniel has greyed nicely into a silver fox, and son Rosencrantz is grown up. It should be time to enjoy life.

That is until the annual family Christmas with her hideous mother-in-law Ethel, and Coco opens her gift from Daniel. It’s not the jewellery she chose, but an iPhone. This marks the start of Daniel’s mid-life crisis and she catches him in bed with a younger woman.

The iPhone becomes a confessional of sorts, through emails to her friends Chris, an ageing trustafarian and Marika a slightly alcoholic schoolteacher.

Then she meets the hunky Adam and she’s back in the world of dating as a single forty-something...

Read the emails which tell the hilarious tale of Coco picking up the pieces.

Coco's story made for a quick and entertaining one to read. Using emails to tell the story was a fun and modern way for a character to keep a diary of sorts. Using emails kept the story moving through a significant period of time quite quickly in a natural way. I found some of the emails a little too long and literary to be believable, but they were still written well, which more than made up for it.

I found myself laughing out loud several times, because her antics and the words she uses to describe them were hilarious. Her life is so complicated, and becomes more so before the story ends. It was fun to watch it unfold.

It did take me a while to develop a serious connection to Coco. While I always found her story interesting to watch unfold, it took a good chunk of the book for me to like her. That's not a bad thing though, because ultimately I did like her. Ultimately she is a good friend and mother who wants the best for the people she cares about. She understandably goes through some selfish patches, which are unavoidable after dealing with the end of her marriage thanks to Daniel's lies and infidelity.

I especially enjoyed watching her relationship with her son. My favorite exchanges are their messages asking the other to bring their glasses or anything while they are sitting in the same house. I'm guilty of texting my roommates when we are only rooms apart to avoid the inconvenience of having to actually stand up and walk to engage in conversation.

Some of the supporting characters in the story drove me nuts, much in the same way I imagine they drove Coco crazy. Between their overdramatics and plain annoyance, I found myself just as frustrated with them as Coco. This was a nice touch on Bryndza's part to evoke significant emotion -- even if it was irritation.

Bryndza succeeded in creating a highly entertaining read, and I look forward to reading more of his work.

About the Author
Robert Bryndza is a British born writer. His books include The Not So Secret Emails Of Coco Pinchard and Bitch Hollywood.

He currently lives in Slovakia with his Slovak partner Ján. They have been lucky enough to go on many adventures. Their year spent living and working in Los Angeles was the inspiration for Bitch Hollywood which was also a best seller in Slovakia as Mrcha Hollywood.

When he's not writing or learning Slovak, Rob enjoys rollerblading, cooking, going to the movies and planning the next adventure.

He also writes a blog; A British Guy In Slovakia at www.teambryndzabooks.com.