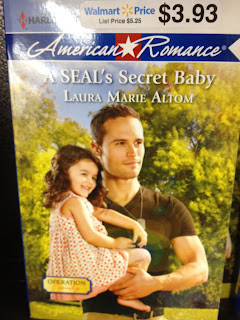 
Navy SEAL Deacon Murphy's tryst with Ellie Hilliard was white-hot, but quickly forgotten when she met her husband, his best friend, Tom. That was fine by Deacon. As a rule, he avoided making commitments, at least to anything other than the navy.

But when Tom died, Deacon promised that he'd watch over Ellie and her daughter, Pia -- not knowing that Pia was actually his, and never expecting that he'd fall for them both in the process.

Ellie is terrified of getting too close to Deacon, and not just because of his high-risk career. Losing Tom was hard enough. If Tom's parents knew the truth about Pia, she could lose them too -- and they're the only family she has left.

My Take
What's not to like about this? The author's name is Laura Marie, just like me, so I was instantly drawn. Plus, you get a hunky military guy on the cover with an adorable baby. Throw in the super dramatic formulaic title and you have to give bonus points for all the drama: SEAL, secret and baby. Could this be any more delicious sounding?

Once I got past my initial humor and name nepotism, I'll admit I spent more than a few seconds admiring those bulging biceps and bit of scruff on his face. Total babe. Plus, he is a man in uniform -- or he would be if he wasn't off duty. Be still my heart. 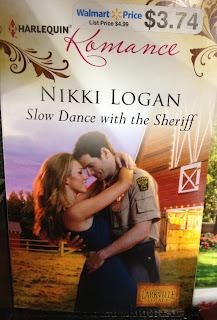 Slow Dance with the Sheriff by Nikki Logan
Series: Romance
Tagline: When New York came to Texas...
Back Cover


Ex-ballerina Eleanor Patterson is the darling of Manhattan society -- until she discovers her pedigree background is a lie. So she heads to sleepy Larkville for answers...

Sheriff Jed Jackson never expected to rescue a stunning woman from a herd of cattle, or to be so fascinated by the vulnerability beneath Ellie's tough city veneer. Yet watching her unwind is irresistible, and as he helps her learn to dance again he wants to give both Ellie and himself a new beginning.

My Take
This one almost had me at the title. Then, when I flipped the cover to find a story about yet another Ellie, I knew it had to be destiny. Throw in buzzwords such as "vulnerability," "tough city veneer" and "irresistible," and even I was ready to see how this small-town sheriff planned to help this ballerina dance again.

Have I already mentioned my love of a man in uniform? I'd like to dance with this one, if you know what I mean. Damn it, this world needs more stories about ballerinas and sheriffs. 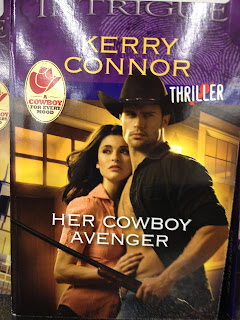 Her Cowboy Avenger by Kerry Connor
Series: Intrigue
Tagline: This cowboy will do anything she asks... except ride away.
Back Cover


As soon as Matt Alvarez returns to his small Texas town, he knows the situation is worse than he thought. And yet the angry glares and muttered threats won't keep Elena Weston from proving she's innocent of murder. Matt isn't at all surprised. Elena is as stubborn as she was ten years ago, when their love seemed limitless -- until circumstances tore them apart. Now that he's back, Matt has no intention of allowing Elena to face her troubles alone. But the passion that still burns between them is as tempting -- and dangerous -- as uncovering the truth. And their only chance at survival means baiting a killer lying in  wait... a killer more than ready to bury his secrets with them.

My Take
This tagline is quite possibly the best, most beautifully constructed bit of sales I have ever seen. Add in our cowboy's brooding stare, bare chest, and next-day shadow, and my knees were weak -- and not just from the good chuckle it gave me. And because I know my mother isn't reading this post, I have no shame in admitting I'd like to lick, then bite that cowboy's chest.

Now, do me a favor. Read that back cover blurb out loud in a sinister movie trailer announcer's voice. How hard was it for you to keep a straight face? I didn't even mind the stares I got from my fellow Wally World shoppers when I burst out into hysterical laughter after doing it in the middle of the book aisle.