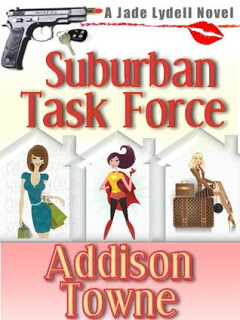 A group of fiesty women take matters into their own hands in Addison Towne's Suburban Task Force.


It takes a home invasion scare and a co-workers brutal mugging to wake Jade from her suburban slumber.  The adventure begins when she and her two best friends forgo an uplifting spa retreat for an intense tactical, gun and self defense weekend, all without their husbands’ knowledge.

Upon their return, feeling rejuvenated and proud, the women try to re-adapt to their suburban lifestyles.   Not so easy when you have to attend a VIP party on Catalina Island with the who’s who of Hollywood and Politics.  Without warning, the island is taken hostage by a rogue terrorist group.  With the men and women separated, and all outside communication cut off, Jade and her friends feel their only hope is to use their combined talents and outlandish movie knowledge to outsmart their captors.

Comedy and daring action ensue as the three women, with one weekend of self defense training, try to lead an all out attack against those holding their loved ones hostage.

Quirky and funny, Suburban Task Force was a clever take on the women's literature genre with plenty of action for fans of suspense. The story's greatest strength definitely came from the premise, which was unusual and fun.

I also enjoyed the dialogue. The women -- and the men in their lives -- were down right funny once they got each other going.

The story moved quickly and was an entertaining, light read. I laughed out loud plenty and would suggest this for anyone looking for a little comedy mixed with intrigue.

What made the story especially entertaining was watching this group of women bounce between their real lives in suburbia and their covert ops-like task force. Jade and her friends made for an interesting group of characters. At times, they were not always the most likeable, which is usually a problem for me. However, their shenanigans and most of their actions made up for it.

Ultimately, I found myself rooting for them, which is what matters in the end.

The style of writing -- namely the point of view and voice -- changes at times, so be prepared to switch your frame of thinking. That's not a bad thing, mind you: different can be good.

Towne definitely has a unique story on her hands, here.The mix of suspense, humor and often silly women had me flipping the pages to the end. I'd be glad to see what messes these women can get into in the future.

Check back tomorrow for more from the author, Addison Towne. 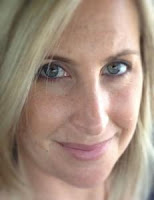 Addison Towne is a lover of fashion, foes and fun!  She was born and raised in Chicago. Her background in television, film and marketing gave her the motivation and passion to write Suburban Task Force. As a entrepreneur she has spent the last ten years developing brands and products that have earned her awards and recognition ranging from a television Emmy to a CEO of the year Women Making a Difference nod.

You can reach her via email at AddisonTowne@gmail.com. She is currently working on the next Suburban Task Force series and looks forward to reader input.