book review: what lies behind 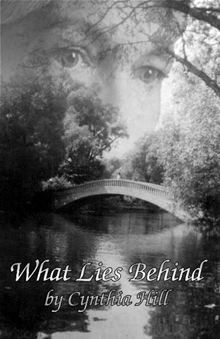 Cynthia Hill's What Lies Behind manages to clench the stomach with emotion while prompting a reader to flip the pages to piece together the mystery of a woman's life.

Every family has its secrets...Behind the clouds of dementia, Lillian holds memories of a life that her granddaughter Lisa could never imagine. From her childhood in 1920s and 30s Toronto, to a young World War II society bride, through scandal and unthinkable tragedies, Lillian kept her extraordinary life a secret, retreating into a lonely, bitter existence. Curious about her grandmother's mysterious past, Lisa unearths a long-buried secret that may finally bring the truth to light.

I'm going to throw this out right away before I get on with the review: This book had me on the brink of tears almost from the beginning. With Alzheimer's Disease a part of my family's history, it was only too easy for me to project myself on Lily and Lisa's family story. But even without my personal connection to the disease and the effects it can have on a family, the story still evoked plenty of emotion.

Told interestingly in a two-string linear format, the bulk of the story follows the life of Lillian Sullivan from her young childhood as the well-raised child of socialites through her ultimate final home in a nursing home. Beginning during the roaring 20s and ending, today, Lily lives through the Great Depression, World War II and a constantly changing world.

Faced with pressures and stigmas that come with the time period and her place in society, Lily makes plenty of wrong decisions, which negatively alter her life. At same time, she faces challenges beyond her control. Raised to always keep her emotions concealed and behave as a lady, Lily's attempts to please her parents by doing so. Ultimately, this creates barriers between herself and romantic relations and with her children and ultimately grandchildren.

Lillian has a lot going for and against her, but she is no saint. Neither is her granddaughter for that matter. But both were so relatable, it was possible to forgive them their faults and sincerely hope their strengths could ultimately help them.

The result of Lily's life leaves the once happy and bubbly child a bitter and nearly broken woman late in life. I can't say much more about that without giving away too much of the plot, but it was well done. I honestly wondered how Cynthia would manage to get the story from those extremes in the beginning to the end, but she did it and the journey made sense.

Let's just say I was no longer on the brink of tears during the last quarter of the book. I admit reading this book hurt. A lot. I don't think I've cried this hard during a book since I read The Five People You Meet in Heaven or maybe Catching Fire. That should give you an idea that while it pried tears out of me, they were good tears. It's good when a book can give you emotions without overtly forcing them.

Mixed between years of Lillian's life -- which transitioned amazingly well when you consider the book covered the better part of a century -- we witness a few months of her granddaughter Lisa's life. Lisa was never close to her grandmother, and begins to learn more about pieces in her family's history after finding some old papers.

Though she recognizes she can never ultimately know the whole story, because the one person who can tell it is beyond recalling, her natural inquisitiveness leads her to look. At the same time, without knowing, she seems to face similar parallels to her grandmother's life, though her end choices and end results are different.

Perhaps the most beautifully heartbreaking part of this story is for the reader to see how similar these two women are, but neither will ever know how close their connection is beyond blood. Though their story resolves as well as it could, I was still left with a little bittersweet ache that stuck with me after I put the book away.

On a lighter note, I don't think it gives too much away to say that at multiple times in Lily and Lisa's stories, the men in their lives had me saying "those dicks" right out loud.

For me this was a painful and heavy read, but in a wonderful way. I flew through the pages of these books in an evening. Though the story left my heart hurting a little and my brain working a lot, this was a well-crafted story I am glad I read.

Special thanks to Cynthia for letting me read this. Extra thanks for her patience.