excerpt of 'the saint's devilish deal'

Enjoy this excerpt from Kristina Knight's The Saint's Devilish Deal. Check back later, today, for my review. 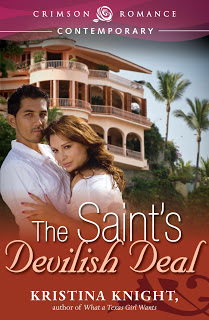 Esmerelda Quinn has been looking for a place to belong since her parents were killed in a car crash when she was young. The closest thing to home has always been Aunt Constance's villa in Puerto Vallarta, so after a string of hotellier jobs, she's coming home to run the villa.

Santiago Cruz has called the villa home for as long as he can remember. In between surfing events, Constance has always had a room for him. Color him surprised when Constance leaves him with a joint interest in the villa - along with her niece Esmerelda.

Esme isn't thrilled to share ownership of the villa with the the youngest Cruz brother - especially as the Cruz family has been after the villa for years. But Santiago has grown up while she's been away and soon she finds herself falling for the rich boy down the hall - all over again.


Esme ran her index finger along the neckline of her silk blouse, praying for a little relief from the oppressive heat Santiago brought into the room with him. Glancing up she saw the fan was, indeed, still moving. The air itself seemed to hold still for him.

“. . .and so Constance wants you to run the villa, with Esmerelda, for the next six months. Three with you in charge, three with Esme running things.” Velazquez’s tone said Esme running anything would end in disaster. “At the end of that time, a decision will be made as to the future of Casa. Although, I have to say, based on the bank balances and outstanding loans, I don’t see much hope for it.” Velazquez tapped the file closed and clasped his hands together on the desk blotter.

“I will not vacate my property to leave him—” she jerked her thumb toward the pseudosurfer currently slouched on the lawyer’s Spanish leather sofa “—in charge for five minutes, much less the three months mentioned in that letter.”

Since being summoned to Puerto Vallarta, Esme’s world had turned topsy-turvy. A villa employee had met her at the airport gate, delivering a single-page note from Aunt Constance, telling Esme that Santiago would help her run the villa until Con’s return from a private medical facility. Esme had barely known Constance was sick and now she was gone before Esme could even set down her suitcase.

Esme spared another glace toward the sofa. Was Santiago paler than when he’d walked in? Couldn’t be. No, his casual posture in the corner of the sofa belied any of the surprise that was currently making it hard for her to breathe. The Patek Phillipe watch on his wrist, costing more than her entire ensemble, might be the only vestige of the businessman she remembered— but that man still existed. He wasn’t surprised and she shouldn’t be. Aunt Constance always liked a little healthy competition, she reminded herself.

But a vacation resort needed stability to grow, not one manger one week and another the next.

“Señorita Quinn, I know this comes as a shock, but Constance was very clear before she left for her extended rest.” The lawyer’s voice brought Esme abruptly back to the present. His glance skipped from her face to Santiago’s and back again as he clenched his jaw.

Great, she’d annoyed the only man who could reverse this ridiculous situation.

“As long as we’re both on the property, though, we meet Constance’s demands, correct? So how about keeping him on in an advisory capacity, while I run things?”

“We all know the highest bidder at any auction will be Eduardo Cruz. Why would I work with one Cruz while another is already waiting to take my property?” Crossing her arms over her chest, Esme sat back. Santiago shifted and she cut her eyes to the sofa, focusing on her nemesis.

“Look, you may have conned Aunt Constance with your surfer boy routine, but I don’t buy it.You don’t want to run a hotel. You don’t even want to be here, so why don’t you go buy a coffee downstairs while the adults talk?”

The lawyer gasped but Santiago only grinned. Just like him not to get an insult when aimed directly at him. Or his feet, since she found it hard to look directly into those deep brown eyes without wanting to drown in them. God, she thought she was past the point of being charmed by The Saint.

“I see the kitten has sharpened her claws,” he drawled. Each syllable rolled off his tongue like honey. Despite the heat of the day, Esme shivered. 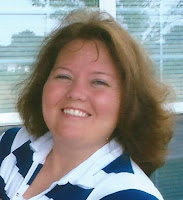 Once upon a time, Kristina Knight spent her days running from car crash to fire to meetings with local police – no, she wasn’t a trouble-maker she was a journalist. When the opportunity to write what she wanted – business and family/parenting articles – and to focus more energy on the stories in her head, she jumped at it.

And she’s never looked back. Now she writes articles for magazines and such by day and writes romance novels with spice by night. And any toddler-free, five minute break she has. She lives on Lake Erie with her husband and 4 year old daughter. Happily ever after.