interview with the author of 'dangerous woman'

I'm pleased to have p.m. terrell here for an interview to promote her book, Secrets of a Dangerous Woman, as part of her Goddess Fish book tour. Be sure to check the end of the post to find out how to win a prize from the author. 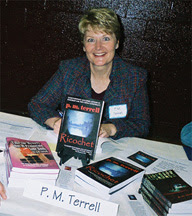 Change the Word: How do you stay organized?
p.m. terrell: I have always been a highly organized individual. In 2012, I was committed to writing three books and co-chairing a huge annual writer’s conference and book fair. I couldn’t achieve all that I do without being highly structured. I rise at 5:30 seven days a week and I work until 5 or 6 p.m. each day with a one-hour lunch break to run errands. It works for me, because I love what I do.

CTW: How did you come up with the idea to write Secrets of a Dangerous Woman?
pt: It seemed for a long time as if every time I opened a newspaper or turned on the television, another politician had done something immoral or illegal. Having been a computer specialist before I was a full-time writer (my specialty is in computer intelligence and computer crime) I knew that no one should have any expectation of privacy in this day and age. So it astounded me that politicians thought they could hide such behavior. I came up with the computer hacker in the Black Swamp Mysteries series finding the same things I had and establishing a list of politicians who could be bought, bribed or destroyed because of their own actions. That became the plot for Secrets of a Dangerous Woman.

CTW: What is the biggest lesson you learned while writing this book?
pt: How much easier a series is than stand-alone books! I’d been writing stand-alones for years and the first few chapters were always needed to lay the groundwork: introduce the characters and the backdrop while moving the plot forward. Without the need to do that in Secrets (it is the third book in the Black Swamp Mysteries series) I could focus on the plot—which is like the reader boarding the roller coaster at the top of that first peak!

CTW: What was the greatest challenge while writing?
pt: Publicizing and promoting the previous book, Vicki’s Key, which was launched while I was writing Secrets of a Dangerous Woman. More and more of the responsibility for marketing and promotion falls to the author these days, which splits my time between what I want to do and what I need to do.

CTW: What is the best piece of writing advice you ever received?
pt: Take the ego out of the work. When a writer thinks their work is the best thing since sliced bread, they leave themselves with no room for improvement. And there isn’t a writer alive who can’t improve in some way or another. I always try to listen to constructive criticism and glean what I can out of it. 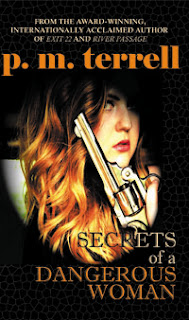 CTW: How about the worst?
pt: The worst piece of writing advice I ever received was from a New York Times bestselling author who told me after my first suspense/thriller had been rejected by three publishers to give up. Obviously, I didn’t heed his advice!

CTW: What's your favorite latest read?
pt: The Haunting series by Erin Quinn. I read all four of them this past year and love them. She can’t write fast enough for me!

CTW: What is up next for you and your writing career?
pt: I am finishing up Dylan’s Song, the fourth book in the Black Swamp Mysteries series. It is scheduled for release in the spring of 2013. After that, I am scheduled to write the second book in a new series (no release date yet on that series) and then the fifth and sixth books in the Black Swamp Mysteries series. So next year I will be writing another three books and starting on a fourth.
My agent is shopping film rights to all my books and I am hoping 2013 will be my lucky year!

CTW: Wow - that's amazing news. Congratulations! Is there anything else you would like to share with us before we say goodbye?
pt: Yes—if any of your readers find themselves in the North Carolina area in February 2013, I hope they’ll make plans to visit the Book ‘Em North Carolina Writers’ Conference and Book Fair on Feb. 23. It is free and open to the public. We have more than 75 authors, publishers, literary agents and book promoters—along with one awesome Hollywood producer—who will talk about their work and the publishing industry. All book sales benefit literacy campaigns in our community. More information can be found at www.bookemnc.org, including a bio on each author and links to their sites.

About the Book
In Secrets of a Dangerous Woman, Dylan Maguire is back in his first assignment with the CIA: to interrogate recently captured Brenda Carnegie. But when she escapes again, it's obvious she's had help from within the CIA's own ranks. With Vicki Boyd's assistance, Brenda is back in Dylan's custody. And now he must find out why some in the highest levels of our government want her dead while others are willing to risk everything to help her. And when he discovers Brenda's real identity, his mission has just become very personal.

Excerpt of Secrets of a Dangerous Woman


“Who are you running from?” Vicki asked.

Brenda took a deep breath. “I am in trouble. Big trouble.”

“Depends on who you ask.” She took a deep breath. “I’m tired, Vicki. Really tired. I need to get off the street. Stay inside for a day or two. Regroup.”

“I’m living in Lumberton now. The woman who owned the house where I’m staying passed away. Her nephew inherited it.”

Her eyes narrowed. “Yeah? Where’s he?”

“I live with him. Come home with me. It’s a big house, three stories.”

Brenda frowned as if she was deep in thought. “It’s just you and him there?”

“His name’s Dylan. I’ll tell you all about him on the way.”

She half nodded. “He won’t be taken aback by you bringing me home? I’m a bit more to handle than a stray cat.”

Vicki blushed. “He’s got a strong sense of family. Besides,” she said as she started to rise, “it’s suppertime and you need to eat. We’ll get something in your belly and you’ll get a good night’s sleep.”

Brenda hesitated only briefly before she rose from the table. “You sure you can handle the intrusion?”

As they made their way toward the door, Brenda whispered, “I wouldn’t be too sure about that.”

About the Author
p.m.terrell is the award-winning, internationally acclaimed author of more than 16 books, including Vicki's Key, a 2012 International Book Awards finalist, and River Passage, 2010 Best Fiction & Drama winner. She is the co-founder of The Book 'Em Foundation whose slogan is "Buy a Book and Stop a Crook" and the co-chair of Book 'Em North Carolina Writers Conference & Book Fair.

***Prize Alert: p.m.will give a $25 Amazon Gift Card to one randomly drawn commenter. Follow the tour and comment on other posts, too. The more you comment,the better your chances of winning.***