Disclaimer: This review contains plot spoilers. Please proceed at your own risk. I do try to flag them in here, though, so you can scan it without seeing too much. 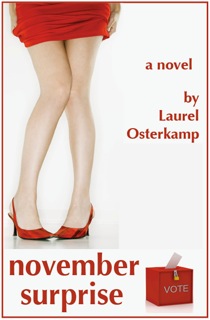 Laurel Ostekamp's November Surprise offers a more than entertainment in her girl meets boy meets presidential candidates story. A laugh-out-loud, heart tugging and fast read, November Surprise has to be one of my favorite reads of the year as it delves into the story of a woman figuring out her professional, political and romantic life.

Now, I'm going to shake up this book review. If you follow me on Facebook and Twitter (and if you don't, but like the blog, you should), I shared a photo of what a typical Sunday looks like for me. (When I say typical, I mean probably 75 percent.) Most Sundays you'll find my at my sister's bar reading a book and taking notes for a review. If I'm not doing it there, then I'm probably following the same procedure at home sans drinks. The outcome is always the same. I read a book (and as a terrible procrastinator, it's usually for the next day's blog post), I make a bunch of scribbles with my God-honest impressions and takeaways, and somehow I write a review of it before the next day.

Well, after sharing some of my thoughts from today's read with my sister, she thought I should review this book using the seven note cards (front and back) I used to make notes on this book. I liked the idea, and I hope Laurel and Samantha, the tour organizer, are cool with me trying out this approach with her book.

Before I do that, here's the gist of the book...

For Lucy Jones, the distinction between love and politics is hazy at best. Both can be all-consuming, and either can lead to a heart-breaking loss or an exhilarating win. Whatever the case, if you're seen as a loser, you probably are one. Lucy first learns this lesson in 1988, when she's a shy girl, battling a high school bully and rooting for Dukakis. Through the years Lucy will experience stunning victories and agonizing defeats as she makes the choices that define her. Meanwhile, she also struggles to define her relationship with Monty, who comes in and out of her life like the changes in public opinion. Is Monty simply a one-night stand, a kindred spirit, or the love of her life? And by 2008, can he offer her a change to believe in?

Over the course of twenty years and six presidential elections, Lucy grows and adjusts with the times. Filled with snarky political and pop-culture references, November Surprise is about the journey we take to believe in a candidate, in love, and in ourselves.

November Surprise is a companion piece to Campaign Promises, which is free on Amazon. They can be read in either order.

Now that you know what the book is about, I should take a quick moment to warn you that this unconventional review will contain spoilers. Consider this a DISCLAIMER. If you'd rather not see this bit, scroll down until you see my note "Regular review."

Another disclaimer: I'm more than a little nervous about this, because you'll not only see how nuts I am while I review, but you will likely detect my political leanings. Just know I'm by no means trying to sway your own opinion one way or the other. If you read this and are upset by any of my opinions, just know that my father is even more disappointed than you. The only reason I include any inkling of my beliefs is because the bulk of the book is about Lucy's, and when I read a book like this, I basically have a conversation with the main character. She shares her thoughts, I share mine.

So with that... I give you a transcription of my review note cards, and the random thoughts I have while reading a book for review. If you read carefully, you'll detect the moment my second cocktail kicked in:

1988 Election:
1992 Election:
1996 Election:
In Between:
2000 Election:
2004 Election:
2008 Primary and Election:
NO MORE SPOILERS!!!
Final Thoughts (also from note cards):
So with that, I'll leave with you saying this was a super fast and worthwhile read -- especially in election season. Whether or note you agree with Lucy's politics, I hope you'll appreciate her passion and desire to believe in people.

I also really liked the character of Monty. Their relationship complications seemed reasonable to me, and ultimately I found him adorable. I also liked the friendship she had with his brother, Jack. The final scene with all three of them together is so sweet, and ultimately shows the power of friendship and family.

Told unconventionally, it had a big impact. I liked the format, I liked the voice and I liked the takeways. All were approachable while making for a thought-evoking and entertaining read.

This book is a bargain buy for all of the entertainment it provides. If I were one of the TV personalities referenced in this book, I would list it under, "BUY, BUY, BUY."

Now, I feel a bit naked after exposing all of my raw thoughts to you, so I think I'll go hide under a pile of paperwork at the office.

Check back tomorrow for my interview with the author of November Surprise, Laurel Osterkamp. 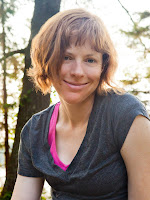 Laurel Osterkamp was a comedy writer in Minneapolis before she began writing novels. Her first novel, Following My Toes, has been a Kindle best seller and won the 2008 Indie Excellence Award for Chick Lit. Starring in the Movie of My Life received honors in the 2011 Indie Excellence Awards for Chick Lit, and in the 2011 International Book Awards for Women's Fiction and Young Adult Lit. Both books are indie approved at indiereader.com. She currently teaches high school, and is working on her next book, which is inspired by her recent jury duty.