excerpt: falling for you

Blogger's Note: I'm thrilled to share this excerpt of Heather Thurmeier's Falling For You as she kicks off her Chick Lit Plus blog tour for the steamy novel. Check back later, today, for my review of the book, and tomorrow for an interview with the author. 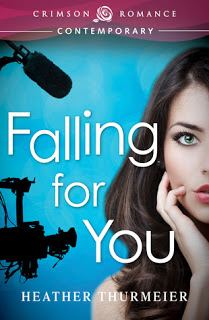 As Cassidy glanced around the formal living room, the ball of lead in her stomach grew.

What have I done?

How on earth did she end up here in Denver, sitting in a mansion, surrounded by cameras and beautiful women—some of whom had obvious fake boobs and hair extensions? Of course, she knew how she’d ended up here and it had nothing to do with magic or any other Hollywood special effect.

It had been her meddling little sister Keira who’d taken it upon herself to apply to be on a new reality dating show—using Cassidy’s name. To Cassidy’s horror, she’d actually been accepted. When she’d gotten the unexpected call from the show’s producer, she’d wanted to kill her sister. Instead, she’d been convinced to go through with the rest of the audition process and screen tests. By the time it was all over and she was asked to be on the show, Cassidy had grown used to the idea of having an opportunity to fall in love with some mystery bachelor.

Her friends told her to forget the show and take a cruise instead, where she could soak in the sun while “Margaritaville” played over the pool speakers. But did she listen?

Maybe he’ll be the one. Cassidy searched the room for the bachelor of the show, her stomach twisting into a knot at the thought of being forced to date someone new. She hadn’t been with anyone since Brad chose to leave her and New York behind to go back to California to start pro-surfing again. Maybe coming on the show would force her out of her six-month dating hibernation. Or maybe she’d throw up on the bachelor’s shoes when she finally met him. Either was a definite possibility.

Coming on the show sounded like a good idea at the time. But now she was here— now it was real and not some thing she would do in the future someday. She casually wiped her palms across her thighs and prayed she wouldn’t have to shake anyone’s hand anytime soon.

Cassidy nervously scanned the room, checking out the other single girls who had also come on the show in the hopes of finding Mr. Right—or, at least, Mr. Right Now. They all appeared more confident than she felt, chatting and mingling with ease while she sat alone on the couch twisting a napkin between trembling fingers. Every hair color, eye color, height, and personal style was reflected.

She wondered how she would ever stand out in this crowd of glamorous women with her mousy brown hair and eyes the color of pistachio ice cream. No one even likes pistachio ice cream, nor wants to have any part of their body resemble it. She tugged at the hem of her plain white shirt, wishing she’d decided to wear something bright and bold instead. Maybe she should have taken a few more minutes in front of the mirror to touch up her makeup while she’d had the chance.


Newly single Cassidy Quinn is thrilled to be a contestant on the new reality dating show The One. But her excitement turns to horror when the gorgeous bachelor turns out to be her ex-boyfriend. Seeing Brad again makes Cassidy realize she might not be as "over him" as she thought-and then she meets hunky cameraman Evan Burke. After watching his brother lose his wife in a tragic accident, Evan vows never to fall in love. But following Cassidy around as her personal cameraman makes him question his decision, and resisting her gets harder with every sunbathing, bikini-wearing day. Cassidy and Evan begin a forbidden affair while her ex-boyfriend tries to win her heart back one groping, awkward moment at a time. If Cassidy can manage to stop falling off horses (literally), stop falling onto her ex-boyfriend, the bachelor (yes, literally), and stop falling in love with backstage playboy Evan, she might still make it through the show without becoming a tabloid sensation. But soon Cassidy must choose between the ex who broke her heart and the cameraman who might never love her back. For Cassidy, this reality show just got real. 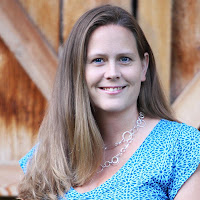 Heather Thurmeier is a lover of strawberry margaritas, a hater of spiders, and a reality TV junkie. She was born and raised in the Canadian prairies, but now lives in upstate New York with her own personal romance Hero (aka her husband) and their two little princesses. When she's not busy taking care of the kids and an adventurous puppy named Indy, Heather's hard at work on her next romance novel.

"Heather Thurmeier's hunky heroes and feisty heroines will have you laughing out loud, falling in love ... and coming back for more!" ~ Carly Phillips, NY Times Bestselling Author


Love and Lattes, Love on Landing, Love or Luxury, Bunny Hills and Bikinis, Falling for You ~ Available now!

Stuck on You, Lost without You ~ Coming Soon!