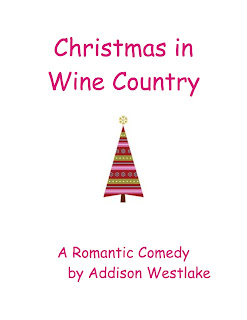 Contrary to what the title suggests, Addison Westlake's Christmas in Wine Country is more than a story about a holiday in one of America's most scenic settings. It is about a young woman undergoing major transformation in her life professionally, personally and romantically.

After taking over responsibility for her major advertising company's annual holiday party at last minute, Lila finds herself in crisis. The company's usual event planner, who is out on maternity leave, accidentally sent the directions for her annual Cinco de Mayo party instead of the company's usually swanky preferences, and the colleague she has secretly dated for two years is all over a French hussy. To make matters worse, Lila can't get over worrying about the potential tripping hazard the icy cobblestone walkway creates. Lila snaps, and after drunkenly singing karaoke and accidentally kicking a party guest in the head, she finds herself without a job and without a boyfriend.

Lila finds herself solo in wine country on the weekend getaway she planned for her ex in wine country. Instead of romance, Lila reconnects with her college roommate, lands a job at a bookstore and finds an adorable apartment that overlooks the water. During the next year, Lila learns to find happiness, discovers good guys are worth waiting for and true friends are the best kind.

This book was a big hit with me. From the get-go, I was instantly bonded with Lila. Imperfect, but in a sweet way, her greatest flaws come from wanting to find acceptance from her mother, resolution with her long-absent father and love with someone who is willing to give as much as her. Sometimes, her efforts to achieve these goals leave her to do somewhat crazy things -- like going on a salad-only diet and bleaching and ironing her hair to impress a man. But haven't we all been there?

The characters surrounding her are charming. Lila has a wonderful relationship with her grandmother, who was completely adorable. Everyone should have such a sweet and supportive grandma to say, "I'm proud of you," in the midst of a personal makeover.

In addition, the townspeople are charming and hilarious instead of overly involved and annoying. Even when some of Lila's new friends try their hand at meddling, it comes off as funny instead of irritating. That's a tough balance to strike, and Westlake did it well.

The romantic element in this story was also sweet. Though it had me worried more than a few times, and I spent a good chunk of the book saying, "get it together already," the payoff was worth it. I am a big fan of the still waters run deep type of leading man, and Jake, the mysterious son of the local vineyard owner, offers plenty of complexity. He kept me curious and suspicious of his motives, even while I liked him. I also enjoyed the douchey ex. He was so much fun to dislike.

This was a fast-paced, fun book to read. With each chapter sporting a title taken from an 80s pop song -- did I mention Lila is a huge fan of 80s music just like me? -- and the year moving quickly, the story started off quickly. Though it did slow down toward the end, the story concluded with a cute and satisfying resolution.

Though the title of this book drew me to read it -- it is Christmas season -- and the holiday moments were cute, the majority of the story took place in between two Christmases, making it a worthwhile read any time of year.