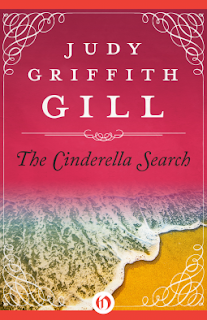 A disillusioned-with-love woman unexpectedly falls into the arms of Prince Charming in Judy Griffith Gill's The Cinderella Search.

Lissa Wilkins is the might manager of the Madronna Inn, located on a British Columbia island off the coast of the mainland. She left the big city life two years ago to help her father manage the inn, which was in her family for years before her dad lost it in a game of pinochle. With any luck, she and a group of locals will raise enough money by the end of Madronna's annual festival to buy the inn back.

An obstacle comes to life when the realtor informs them a third party is also interested in buying the inn. Steve Jackson, son of the Jackson Resort chain tycoon, arrives in town simultaneously, a coincidence too big to overlook. Lissa and her colleagues go out of their way to scare off Steve before his family can swoop in to take their beloved hotel.

But Steve has other interests on his vacation. His biggest is finding the owner of the pair of legs that fell through his room's ceiling one night. Not only does he want to find the culprit who has bugged his room to make noises and rumble his closet and doors, but he found the legs appealing, too. He has his hunches they belong to Lissa, who he is already growing increasingly interested in becoming better acquainted. Motives are kept secret even as Lissa and Steve's attraction for each other grows stronger.

This newly re-released novel offers a quick and entertaining read for romantic comedy fans. Fast moving with plenty of action, this story was so cute I wanted to pinch its cheeks. The situational comedy drew laughter even as a few of the characters tugged at my heart strings.

As a retelling of a fairy tale story, it did a solid job of drawing on classic elements of Cinderella: a hard-working woman in service, a dashing prince and a lost shoe without a known owner spearheading widespread search. At the same time, it had plenty of unique elements that made it a story of its own.

The budding relationship between Lissa and Steve was both adorable and sexy. The sexual tension between these two was huge throughout the story and the payoff worth the wait. Steve in particular had such a fun and decent nature about him paired with good intentions, no matter what the locals thought. I had a big enough crush on him within the first few chapters, I wanted to shake some sense into Lissa.

Basically, I was totally Team Steve.

At times some of the local townspeople could be a little annoying. They meddled when they weren't needed, and their actions often complicated the main characters' lives to the point of conflict. That is neither unexpected or unusual in a story set amongst people with such close ties and deep history. Despite their cliched behavior, it was enjoyable to watch them work together toward common goals, even if their motives were sometimes incorrect.

There were also times it became apparent this story was several years old. Though nothing in particular dated it, the lack of cell phones, Internet or other modern norms quickly gave it away as being a book several years old. This was by no means a bad element, but something to keep in time.

This almost contemporary retelling of a fairy tale story was an enjoyable and light read for killing a couple of hours.