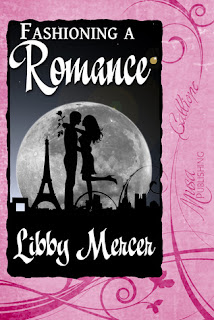 Do you believe in love at first sight? Do you believe people can change? Can two people from such different backgrounds have a future together? In Libby Mercer's Fashioning a Romance, the main characters have to answer those questions and more in a short time.

British CEO John Harrington knows he has it bad for his sister's sexy seamstress Caitlyn Taylor the moment he meets her. And while Caitlyn returns the attraction, she is hesitant to indulge. After all, John screams "player," and in her experience that can only spell disaster. Ultimately, his advances are too hard to resist, especially because he seems so sincere.

As Caitlyn decides whether or not her heart should trust him, John is dealing with the overwhelming feelings that have caught him off guard. A long-term love 'em and leave 'em type, the thought of doing the second part with Caitlyn becomes harder and harder for him to consider.

A fast-paced read, the story is a quick and light story for lovers of romance. The quick story worked well for the even faster moving romance developing on the pages.

Though initially I found John a little too much -- the man has a quote for everything and speaks like he is the leading man in a Jane Austen novel -- he eventually won my heart, much the way he did with Caitlyn.

The same went with Caitlyn. While I was intrigued by her, I was left wondering about her reservations for getting involved with a man when the possibility of an early expiration date loomed ahead. That, too, came to make sense.

By the time both of these pieces fell in place, I wanted nothing more than to see these two kids work out their differences and get it together. A fun and light read filled with interesting characters, I enjoyed the few hours I spent watching John and Caitlyn do just that.