book review: the girl, the gold tooth and everything 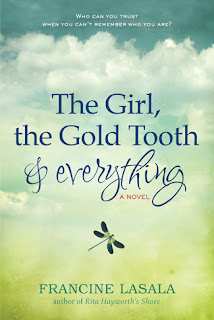 With a delightfully unreliable protagonist who may be losing her mind, Francine La Sala's The Girl, the Gold Tooth and Everything offers a good blend of mystery and entertainment.

Mina Clark has mounting bills to pay, an absent husband a rambunctious daughter to deal with. To make matters worse, she also has amnesia and is afraid her mind is slipping even more. Though she has almost no memory of her life, the people around her do not fill in he blanks, because they fear the circumstances that led her condition are too much for her to handle.

When a visit to the dentist leads her to have a gold crown placed in her mouth, Mina's thoughts -- dreams and memories included -- take a turn for the even crazier. With her life, and her family's, at stake, she must do something to figure out the mystery surrounding her life before it is too late.

This book took so many twists and turns, it was difficult not to get completely caught up in the story. Though written in third person, it followed Mina's train of thought mostly, and with her being an unreliable narrator on account of her amnesia and possible insanity, as a reader I questioned almost everything going on around her. When a writer can pull off a character and story like that, you know it is going to be good.

Throughout the story, as Mina tries to figure out her life, she is inexplicably drawn to a voice on recordings she found in storage. Eventually, it becomes clear who the voice behind the recordings is, which adds more clarity to the story in a totally effective way. I can't say more than that without spoiling the story.

In addition to Mina, the story was filled with characters who added even more intrigue to the story. No one and nothing is who or what they seemed by the end of the book.

Well-developed, suspenseful and filled with several unexpected twists, this was an excellent read that kept me flipping the pages.