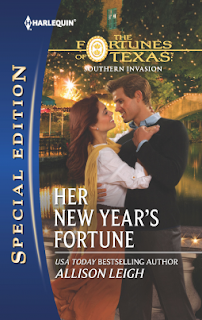 A man of Fortune sweeps into a knitting shop manager's life after the clock strikes midnight in Allison Leigh's Her New Year's Fortune.

Sarah-Jane Early is most comfortable teaching knitting classes and making patterns to post on the shop's website, but agrees to hostess a wedding reception on New Year's Eve to help a friend. The reception happens to be for the Fortune family, local royalty. She catches the eye of none other than Wyatt Fortune, handsome cousin of the bride and a stud in his own right. Surprised by his interest, she gives him a fake name, certain his attention comes from alcohol rather than true feeling. When they meet again, and he persists in becoming better acquainted, Sarah-Jane agrees to go on a date with him.

Wyatt has his own secrets. A recent disagreement with his father has left him angry and determined to start a new life. The small Texas town seems like an ideal place to set roots, giving him more distance from his home in Atlanta. Sarah-Jane -- or whatever her name is -- offers a perfect distraction from his otherwise hectic life.

Neither counts on falling in love or revealing much of themselves. But as Sarah-Jane and Wyatt spend more time together, they find life has other plans.

I have mixed emotions about this book. It started off quickly and page-turning for me. The idea of two people meeting as the new year starts is sweet, and the added element of a man desperately seeking his mystery girl was intriguing. But it slowed down a bit in the middle and touched upon a couple of plot elements that were never fully resolved, which distracted me from the main goal: getting these crazy lovebirds together.

Her New Year's Fortune is about a handsome millionaire falling for a girl who thinks she is an ugly duck when she is really a swan. While I like this plot element, it's repeated mentioning in this instance made me want to smack sweet Sarah-Jane and say, "Get over yourself. You're hot. Live with it." With so much of her thinking she's not gorgeous and Wyatt saying she was, at some point I wondered what they were doing together. While a little sizzle eventually came toward the last part of the book, a bit more of a hot spark early on would have made a difference. I'm not talking about sex, either, just sexual tension.

A few events that happened during the course of the storyline would have been interesting to see unfold. Instead of having the scene right there for readers to see, we heard about it after the fact like in a Greek drama. At both Wyatt and Sarah-Jane were a little too forgiving of each other and some of the conflicts in their lives. When they happened, the resolutions were ultimately good, but a little more struggle to achieve them would have made it great.

This next point is going to make me sound crazy, but I'm going to say it. For being a book titled after a holiday, I was bummed out by how little New Year's Eve or New Year's Day actually happened in the story. Both holidays were basically brushed over, which is quickly becoming one of my biggest pet peeves. My message to the publishing world: Give me a champagne toast or a kiss at midnight, and I will be a happier girl. Or change the title of the book to something less holiday related. Thank you.

Despite some areas that could benefit from a little more development, I enjoyed this story and found it a cute, light read. The heroine is the assistant manager of a knitting shop, which is unique and awesome. Initially, I wondered what someone with a MBA was doing with a job like that, but realized Sarah-Jane was working for love not money. For me, this fact gave her more character development and showed her strong backbone more so than the tense relationship with her never satisfied mother or her self-image issues.

Until he becomes a bit of a dick toward the end -- and I think he got off the hook a little too easily not once, but twice -- Wyatt earns a lot of redemption for everything he did leading up to it. For one, the man is adorably persistent in wooing Sarah-Jane. He calls around and searches for her and does not quit until he finds her. He shows he can be thoughtful in the gifts and other considerations he shares with her. He also proves to be more forgiving than Sarah-Jane by letting her initial deceit go quickly and actually listening to her explanation for why she did it. He wins his biggest points by constantly trying to get Sarah-Jane to see herself as the beautiful, talented woman she has become.

Ultimately, Her New Year's Fortune was a sweet, light read for romance fans looking to get lost in a story with Southern flare and family roots.

For more information about this book, visit Harlequin's Website.