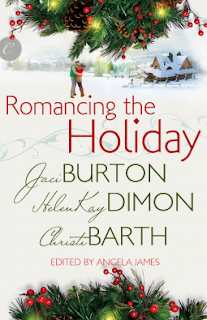 With plenty to land them on both Santa's naughty and nice lists, Jaci Burton, HelenKay Dimon and Christi Barth offer seasonal stories of love and lust in Romancing the Holiday.

As a connoisseur of holiday movies and romance novels, I was excited to dig into these stories. Each features strong-willed leading ladies and crush-worthy male counterparts, and managed to tell stories about love within a short time-frame.

While offering heart-pounding sizzle, the stories were not as full of holiday moments as those accustomed to Christmas romances filled with sleigh rides, snowball fights or mounds of Christmas cookies might expect.


We'll Be Home for Christmas
By HelenKay Dimon

Lila Payne encounters a few major shocks when she arrives in a small West Virginia town to run her uncles old mountain resort. First: The mountain cabins are less like a resort and more like a pile of wood in serious need of burning. Second: The man she had a three-day passionate affair with at a hotel a few towns over is a local businessman. Third: The man in question gave her a fake name. Despite their shaky reunion, Spencer Thomas is not going to let a little previous deception keep him from making a better impression on Lila the second time around.

Lila finds herself spending more time with Spencer when crews from his family's nursery lend a hand to help her get the cabins presentable by the new year. As they work in tight quarters, the old feelings that led them into bed resurface, but are laced with wishes for romance and forever.

This was a cute story with decent amounts of sizzle, the short format prevented the story from further developing the main characters' histories, which gave them plenty of reservations for engaging in a committed relationship. Each had an interesting back story, filled with betrayal and hurt feelings. While offering conflict, the drama could have been upped by addressing these pasts more head on rather than as a line or two of dialogue.

Though part of a series, each character was explained well enough, I did not find myself lacking from not reading the previous stories in the series. In particular, Spencer's brother and friends were likeable, which in turn revealed the good man hiding behind his distant appearances. While the small town setting offered plenty of charm, the meddling townspeople had the potential to be annoying, but stopped just short of it.

What was most lacking for me in this story was the holiday element. Though it started in Spencer's family nursery that sells Christmas trees and pointsettias, and a few mentions about the upcoming holiday, there was nothing else. While this did not take away from telling the love story, it did diminish some of the good cheer and satisfaction I gleam from watching two characters fall in love while singing carols or sipping hot chocolate.

Still, Lila and Spencer seemed well-suited for each other. The sexy chemistry between them seemed real. When they were in a room together, the pages tingled with sexual tension and ultimately sex. I found myself rooting for them even if they were painting cabin walls instead of building an army of snow people.


Ask Her By Christmas
By Christi Barth

Caitlin McIntyre and Kyle Lockhart have been best friends for years. Though long harboring romantic love for Kyle, Caitlin never hints at her true feelings for fear of them going unrequited. She is more than a little surprised when he drops to one knee and asks her to marry him. Unfortunately, before she can say yes and have her dreams come true, she learns he was actually practicing to pop the question to the woman he has been casually seeing for the past few months.

Under direct orders from his father to marry the sleazy heiress he has dated to help their family business, Kyle needs his best friend's help to do the deed justice. Wanting to do his father proud for once in his life, Kyle must ignore the not so friendly feelings he has toward his BFF. As Caitlin helps him plan the perfect proposal, both must decide whether or not they should take their relationship to the next level or end as friends.

Of the three stories in this trilogy, this offered the most in the way of spreading holiday cheer. Within the first chapters, the characters wrapped presents, wore scarves, drank hot chocolate, looked at Christmas trees, went ice skating and window shopped. It was like ABC Family and Hallmark got married, made a baby, dressed it in red and green glitter pajamas and named it "Merry Christmas."

A sucker for stories about long-time friends who become more than friends, I was excited to see where this story went. I wanted so desperately for Caitlin and Kyle to find themselves getting a little too hot under their matching ugly turtlenecked sweaters, which they would be tempted to discard after sipping a little too much egg nog during one of their proposal plotting sessions. Unfortunately, this did not come to be. While I could see their feelings of love for each other were real, a little more spark would have gone a long ways.

And while the build-up in this story was great -- I mean, Caitlin spends weeks helping Kyle try to woo another woman -- it ultimately resolved itself a little too easily. She should have made the guy work a little more for it, especially after he royally biffed it on a few occasions. In particular, he made one big error, which I am not sure I would have been able to forgive so quickly. I also wonder how two people who are so in sync with each other could miss the fact that they want to get naked on a bear-skin rug in front of a fireplace. Or something like that.

If you have dances of sugar plums wafting through your head at night, though, this story will live up to the expectations for a holiday love story.


The Best Thing
By Jaci Burton

Tori loved Brody Kent from afar since high school. For the past four years, she has loved him from within smacking distance as the office manager of the construction company he owns with his brothers. Things have been tense between them since they locked lips at the company Christmas party the year before.

After Brody confronts Tori about her distant behavior, the two find themselves embroiled in a passionate affair. With Brody's family members interfering at every opportunity, both worry about hurting the other while living in constant fear that they will be the one with the broken heart.

From the first pages of the story, it is easy to understand the tension between Brody and Tori. Not only do the two work with each other, but they each are holding back feelings for the other. Though Tori loves Brody, she does not want to end up another notch on his bedpost. At the same time, Brody somewhat resents the presumption that he will use than leave her. Once they finally get it together, this story became seriously steamy.

Family creates plenty of obstacles for these two crazy kids when they're not getting hot and heavy under the sheets. Tori has a history of being let down and abandoned by her family, and is slow to trust. For Brody, his family's love can be problematic. They are constantly involved and watching the couple's next steps, asking about marriage and babies before they have even been together a full quarter. It was easy to understand and feel for the poor guy as he tries to figure out his feelings.

Well-developed as a stand-alone story, Tori and Brody's romance also effortlessly and effectively gave updates on relationships told in previous stories. As someone who had not read the first books, though, I did not find myself struggling to understand what was going on or how everyone related to each other. At the same time, someone who has read the other books will not be bogged down with too many details they have already encountered. We're given what we need to know and nothing more.

Though not overflowing with holiday elements, the story does involve moments of planning the next company holiday party, tree decorating and this year's holiday party. So Christmas was there, but not as there as it could be. Ultimately, this was the strongest of the stories.

It may seem like I am a little too caught up on the holiday elements, but that is what makes a Christmas story a big hit with me. While I liked each of these books in their own rights, I probably would have been a bigger fan if all of them would have been a bit more full of yuletide cheer.

Each was fast-paced. Each had good characters. And all of them were worth the few hours spent curled up with this collection.

If you're looking for a somewhat seasonal read that sizzles, Romancing the Holiday is a quick and light find. Each of the stories offers a different take on love in December and characters who must overcome aspects of their past to build a future with the person who makes their heart pound.