book review: a state of jane 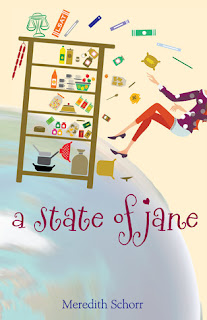 Most romantic stories are about a girl meeting a boy, falling in love and ending happily ever after. Or, if it's a chick lit novel, it's more like happily for now. Meredith Schorr's A State of Jane might seem like one of those stories at first, but it is much more than that.

One year to the day after breaking up with her high school sweetheart, a man she dated for nine years, Jane Frank decides she is ready to re-enter the dating world. Armed with an online dating profile, and ready to be matched based on however many character traits it takes, she is determined to meet the one.

After going on a series of failed dates, her dreams of finding the man of her dreams seems less and less possible. At the same time, she is supposed to be preparing for the LSATs so she can apply, and ultimately go, to law school.

With her life in disarray, and her future uncertain, Jane's life takes a frenzied twist of turns that jeopardize her relationships with family and friends, while also putting her carefully charted plans for love and career at risk.

Jane was a challenging character. Self-centered, overwhelming and surprisingly self-destructive, Jane ends up hurting her friends and family. Often, this girl was a hot mess, and I wanted to smack some sense into her. That should make her unlikeable, but she was not. Perhaps it was because her past was explained well enough or that the circumstances that lead to her meltdown often made her behavior justifiable. Whatever it was, while I frequently found myself frustrated with Jane.

I quickly realized my feelings were a result of me wanting her to get her life together, because I cared. Somehow, rather quickly, she became that friend who you love, but drives you crazy along the way.

The men she dates throughout the book were kind of a hoot to read. Some of them were losers on their own, and others were caught up in her web. That offered a fun mix of hating the bastards who screwed over Jane and feeling badly for the poor fools who got played by her. Her differing experiences with them created natural tension and made for an interesting story.

Jane's relationships with her friends and family members were also somewhat complicated and varying, which added elements of real life. I especially liked her interactions with her sister, because their connection seemed so true.

Jane's relationship with her ex-boyfriend was handled well. At first, I thought it seemed a little unbelievable -- too good to be true. But by the end, it also seemed more realistic (though I can't say why, because it would spoil the book). In fact, I know it's realistic, because I personally went through something kind of similar.

I also found myself fascinated by all of the food Jane made. She's quite the chef. This made for a fun, and somewhat unexpected plot element throughout the story.

Even though her mission seems impossible at times, A State of Jane truly is a story about finding love. That love may or may not be with a soulmate to grow old with in the suburbs, but part of it always comes down to finding love for yourself.