book review: what the dog ate 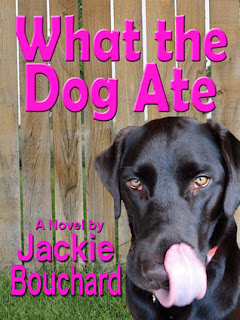 Jackie Bouchard's What the Dog Ate tells the story of Maggie's life falling apart and how she puts it back together.

After Maggie confronts her husband about the mystery panties, he tells her he no longer loves her and wants a divorce so he can start a new life with Miss Purple Panties. Left with Kona, a house needing sold as part of her divorce, a marriage left in shambles and an accounting career that takes all of her time, Maggie needs to make some serious changes or completely fall flat.

A big part of those changes comes in Maggie's disaster of a dating life. It's been about 20 years since she was out on the dating scene, and even though times were tough, she did love her husband.  Watching her re-enter the scene was a mixture of amusement, sympathy and ultimately admiration.

Bouchard did a great job at making a likeable protagonist. From the beginning, I was on Maggie's side and truly wanted to see her do well. Her biggest flaw is being a workaholic who did not see the writing on the wall in her marriage until it was too late.

Even when times are tough, Maggie holds on to some optimism for the future. That's more than admirable, it's enviable. She also is good at taking her share of responsibility when things go awry, which again made her likeable, but not too good to be true. That's a tough balance to strike, and it happened here.

The supporting characters were also good. Her friendship with a certain bicycling gentleman, especially, offered a lot of entertainment and suspense. Suspense, because I wanted to know if she liked him or if he liked her! I also enjoyed her relationship with her mother. It was never easy, but you can tell they love each other, and Maggie really comes through for her mom in a time of need.

Perhaps my favorite part of the story was Maggie's relationship with her dog. More than a springboard for discovering her husband's affair, Kona is one of the best characters in the book. As she goes through relationship, professional and family mayhem, her trusty dog is there to offer support and sometimes advice or inspiration. For anyone who has a close relationship to his or her pet, you will love Maggie and Kona's interactions. They were believable and lovely. Now if I could only get my cats to offer me such insight...

This was a quick read, because of good writing and character development. This is definitely a book I will come back to read again.

About the Author
Jackie Bouchard was born in Southern California and lived there until she and a friend got the crazy idea to move to Bermuda. It turned out to be not such a crazy idea after all since she met her husband there. After Bermuda, she and her husband moved to Canada, then to the east coast of the US, and ultimately back to San Diego. Jackie used to be trapped in the hamster wheel of corporate America, but she was bitten by the writing bug and ultimately managed to escape. Jackie loves: reading, writing, and, yes, even 'rithmetic (seriously, algebra rocks), professional cycling, margaritas, dogs in general, her crazy rescue pup specifically, and her hubby. (Not in that order.) Jackie dislikes: writing about herself in the third person. Her work has been published in "San Diego CityBeat" and the San Diego Writers, Ink's anthology, "A Year in Ink, Vol. 3." "What The Dog Ate" is her first novel