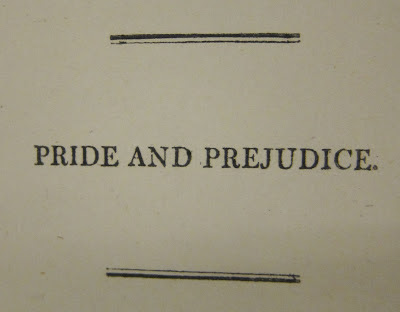 When I was 16, I fell madly and passionately in love. It was not the first time I took the plunge. As a high school student, I had three serious boyfriends and at one point in time or another considered myself in love with them. This time was different.

He was an older man. He came from old money, had friend and family connections I could not fathom and had an impressive home. When we first met, I found him proud and disagreeable, a real dick, quite frankly. But the more I came to know him, the more my opinion changed. Before I was even entirely aware of it, I had fallen in love.

Of course I am talking about Mr. Fitzwilliam Darcy, the engmatic stud who woes Miss Elizabeth Bennet in Jane Austen's Pride and Prejudice. The beloved novel, which inspired countless books and movies, turns 200, tomorrow. And the story is still as gorgeous as ever.

In honor of that anniversary, I wanted to share some of my thoughts on the story and how it has shaped my life as a reader and writer.

I read the book on a family road trip from our home in Omaha to Rock Springs, Colo., the summer before my junior year. As a sophomore, I read Bridget Jones's Diary and watched the movie on repeat. Knowing it was based on Austen's novel I realized I had to read the original. Even though my older friends assured me it was required reading for AP English, and I would get to it eventually senior year, I chose to be ahead of the curve. While we took I-80 west, I lost myself in the story about a young woman, her sisters and a man who proved himself far better than his first impression.

That was the name of the first draft -- First Impressions. Though I love the title, Pride and Prejudice, I find its original name beautiful. We are often told a person only has a first chance at a first impression. That is a lot of pressure to put on a person. While that may be true, this story ultimately proves that a bad first impression does not mean it has to stick.

Through the years, I have re-read the book several times and read a few of Austen's other novels -- Sense and Sensibility, Emma and Persuasion. I consider all four of these books among my favorites, and it is hard to explain why. The best reasoning I can give is this: Through Austen's books, I first experienced classic literature and chick lit. While I always knew I wanted to be a writer, after experiencing the world of Austen, I knew I would write stories about the world I lived in, including family connections, social scenarios and the like.

I have two completed first drafts, and I can see Austen's influence in both. Hell, one of them is a modern reimagining of Persuasion. But even in the other book, I see the way I have described the current socieconomic times, the latest styles and the dynamics between family and friends. The stories feature strong women characters who must undergo transformation before the last page.

Despite my admiration for Pride and Prejudice and Austen in general, her stories have come under scrutiny from others in history.

Charlotte Bronte criticized them for being to unemotional. Mark Twain harshly ranted about how much he hated her work. I find myself quite defensive when I hear these remarks. To Bronte, I say, "Austen's stories have half the drama of your books and made a bigger impression on me." (Though I do like Jane Eyre, and I hope you don't think I'm dissing you, but frankly, you started it.)

And as far Mark Twain. I know this will probably put me on the "unAmerican" list forever, but I really didn't care for the Adventures of Huckleberry Finn. It was one of the few required readings I actually read from cover to cover in high school. (I managed to do well enough in school without doing assigned readings I was too busy to do, because I had stories I wanted to read more, but that's a story for another day.) While I appreciated its significance in Literature (We're required to capitalize the "l" in this situation, right?) and its portrayal of 19th Century Americana, I did not enjoy reading the book. That does not mean I think it's a crappy book. It means it was not my cup of tea.

What I realize now, years after reading the book and seeing these criticisms, is how much they shaped me. It made me consider how being negative about the work of another writer (or any other profession) makes a person look. Frankly, you come off as a pretentious jerk.

Art is subjective. As a book reviewer, I try to keep that in mind. It is the reason I do not believe in publishing negative reviews. It is the reason why, when I do not like a book, movie, TV show or whatever, I will say, "I don't particularly care for it, but that does not mean it sucks."

Does this make me more passive? Certainly. Does it mean I am a wuss? Perhaps. But the reason I do this, is because I never want to be someone who condescendingly acts like I know what makes something good or bad, when in reality no one can.

Now that I have ranted and raved, I'll leave you with one final example of how Pride and Prejudice shaped my life. Meet Jane and Bingley.


My sister and I adopted our kittens more than five years ago from the Cat House, a no-kill animal shelter in Lincoln, Neb. Though I was hesitant to get pets -- they are a lot of work and responsibility, I repeatedly reminded my sister -- I was excited about it at the same time. In my head, I wanted a Lizzie and Mr. Darcy, but when we found our kittens, I knew we had a Jane and Bing instead.

For one, Jane was the most beautitful cat in the world. Personality-wise, she is more Caroline than Jane, but still, a pretty cat deserved to be named after one of the prettiest characters in literature. And, OK, while Jane can be awful from time to time, she is really quite sweet.

As for Bingley, who is one of the great loves of my life, I knew he was no Darcy the moment we met. For one, I envisioned Darcy as a black cat with what paws. For another, I thought he should be more serious. Our Bingley is neither of those. He likes everyone he meets and gives more love than I can deserve.

For someone who considered herself a dog person, I sure fell hard for these cats. And what's not to like? They're super great cuddlers and the love books. I base that on the fact that every time I sit down to read, one of them jumps on my lap to settle in for the story. Also, they both tend to curl up with books left out and purr whenever they walk by my bookshelf. Super cute, right?

So with that, Jane, Bingley and I wish Pride and Prejudice a happy anniversary, and will likely celebrate by watching Colin Firth portray the man who stole my heart 10 years ago.