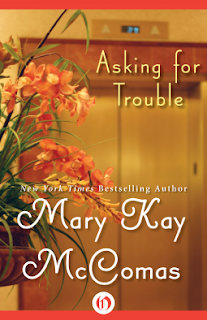 In what could have been a PG-13, drug-free version of a Harold and Kumar movie or something titled, "Dude Where's My Date?" Mary Kay McComas' Asking for Trouble tells the story a couple that embarks on an unconventional set-up date featuring a series of unfortunate incidents in this romantic comedy of errors.

Sydney Weisman is the lead contestant on Electra Love, a hit TV dating show that mixes the whimsies of love with the logic of technology. She returns two weeks after her date with Tom Ghorman to relive the experience in front of the cameras and all of America. Despite complimenting each other well and ceaseless romantic sparks, their date is a disaster. Starting it by spending four hours trapped in an elevator and culminating with a trip to the police department and a stop at the hospital in between, it seems fate is sending them a message.

Even with the disasters, Tom and Sydney seem willing to give their budding relationship a shot until the universe throws them an obstacle too major to ignore. Can they look past the bad and dwell on the good, or is this the end of their whirlwind love affair?

The premise of this story was excellent, and I found myself laughing out loud at the various messes these two kids fell into. I even earned a couple of looks from my fellow passengers. A ridiculously fast read that picked up speed as it raced to the finish, this was a light read that was easy to pick-up and get back into.

Though he seemed too good to be true at first, Tom was cute and a great match for Sydney. Able to calm himself in tough situations and follow his heart, he balances out and is balanced by Sydney who is a little more high-strung and practical. Through time, both are revealed to have plenty of faults and redeeming qualities that make them human. Or at least as human as two characters in a romance ever seem.

My biggest problem with this story was how quickly Tom and Sydney feel for each other. By the end of their first, horrible date, they were in love. However, as they story continued from there, I was able to see some logic. They did spend 12 hours together, much of it traumatic, which brought out their true colors for the other to see early in their relationship. When you consider most first dates include going to an uncomfortable dinner and movie, allowing for three or four hours together, most of it spent trying to impress the other person or not talking, it is more understandable. Plus, you learn a lot about a person when going through crisis together.

What most struck me as I read this book, which was originally published in 1991, was how timeless this story turned out to be. Even though in modern times a camera crew would likely follow the duo along, and they would most definitely have cell phones in this day and age, I never found myself wondering about this, which is evidence of a truly timeless story.

A cute read well worth the couple of hours spent with it, Asking For Trouble is a great story for fans of romantic comedy looking for a happily every after.