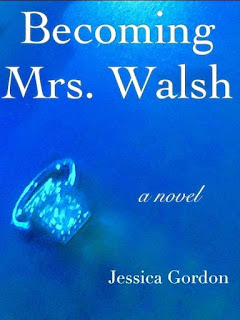 A woman must reconcile what is right for her heart with what is expected of her in Jessica Gordon's Becoming Mrs. Walsh.

Engaged to marry Andrew Walsh, part of Washington, D.C., royalty, Shoshana Thompson sees her upcoming nuptials as a step up in her life. After growing up in the Midwest, the Walsh family represents the glitz and glamor she has missed from her life. In addition to having the support of the family matriarch, she hopes to fit into a band of sisters-in-law who make her feel a bit dowdy despite their kindness.

But while planning the wedding, Shoshana begins to wonder about how she will fit into this new world, one where her husband-to-be is often absent, and her feelings for another man are deeper than platonic. As the wedding day approaches, her mixed feelings become even more confused when she realizes her crush may be reciprocated.

Shoshana was easy to identify with. She wants to fit into this family, but does not feel like she matches. As the story progresses though, she seems better able to be part of the family, though her questions about her upcoming marriage increase. She knowingly makes wrong turns, which makes her human. Still, as the story progressed, there were times she frustrated me. Her increasing interest in material goods made me question her motives, but, her desire to make the right decision -- even when she fails to do it -- gave her redemption.

If she was my friend in real life, though, I would probably get in trouble for smacking her across the head when she made a couple of big mistakes.

The other characters in the story were also interesting. Her future in-laws, who initially seemed intimidating, turn out to be more personable than they seem, which goes to show we're all people at heart. The family dynamics and the complexities behind it was the story's greatest strength.

One person I never completely warmed up to, though, was her fiance. His top secret job makes him mysterious, but instead of coming off sexy, I found myself wondering why Sho wanted to be with someone who left her alone and out of the loop so much of the time. Again, I would've given the girl a wake-up call to all of that if she was real and I was her friend.

I felt tense the entire time I read the story, much like I do when reading a mystery or thriller. That's an unusual sensation when reading a women's literature story void of a murder or other crime. The story's ending caught me off guard. I honestly did not expect it to end the way it did, and was a little disappointed with the conclusion. However, after hearing Gordon plans to write a follow-up to this book, I am a little more optimistic that the story will be resolved in book two.

Well-written with plenty of intrigue to keep the pages turning, Becoming Mrs. Walsh was an entertaining read that has me primed and ready to see how the saga continues.

Check back tomorrow for my interview with Becoming Mrs. Walsh's author, Jessica Gordon.

Jessica Gordon is a Johns Hopkins University alumna for both her undergraduate and graduate degrees. She received her bachelor's degree in liberal arts from the Writing Seminars program and her master's degree in communications.

After working in the corporate world for several years, Jessica decided to return to her first love: creative writing. Jessica takes her readers to the prominent Washington, D.C. area where her characters navigate through the complex world of family, in-laws, and love.

Jessica lives in Washington, D.C. with her husband. This is her first novel.