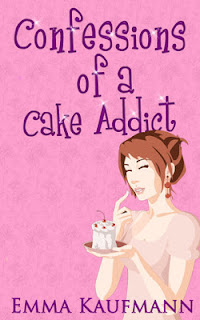 A young Londoner looks for a new image and love in Emma Kaufmann's Confessions of a Cake Addict.

Kate Pickles' life is a disaster. She has a job she hates, a less than stellar romantic history and an addiction to the sweeter things in life, namely cakes and candy. Through a series of letters and emails to her sister in Australia, Kate recounts the misgivings in her life.

After a trip to Vienna with her friend, Eva, Kate's life turns around as she begins to see new possibilities in all areas of her life -- even if it means having to help make a Bollywood film.

This story took me a while to get into. Though the characters were funny and the situations entertaining, the first part of the book had too much back story. Initially, instead of feeling sorry for Kate, I found her whining more than a little annoying.

Though I frequently enjoy reading stories in diary or letter format, most of the time it was not apparent that was how the story was being told. By adding in some dates or subject headers -- anything really -- to indicate that this was a new letter or message to her sister would have made this element stronger. By writing the story as a straight first-person narrative, it would have made the story more active. For me, retrospective story-telling, which usually accompanies stories in this format, makes it more difficult to get lost in a story.

However, once Kate and Eva go to Austria, the story picked up, both in pacing and entertainment value. Instead of bemoaning the life at hand, Kate develops more as a character by making changes in her life and taking a more proactive approach. This would have been a much stronger story if it would have started a little later.

Though the overweight woman who uses food as an emotional crutch theme has been done, this aspect of the story offered most of the redemption for the character. At times it seemed a little like Jane Green's Jemima J, only I liked Kate better than Jemima, because she was a stronger character making the changes more for herself than to appease a man not quite worthy of her.

Probably the most unique aspect of this book was moving the story out of London -- which is the setting in a good chunk of Chick Lit books -- and taking it to Austria. With the exception of The Sound of Music, I cannot recall reading or watching a story unfold in that country. The Bollywood angle was another nice touch, and a lot of fun to follow.

The men in this book also add plenty of laughable moments. When she meets a charming Austrian, it was easy to understand why she fell for the guy.

Though this was an enjoyable story with a lot of potential, a few changes would have made this a much stronger read. That said, I really did like some parts of this book and would look forward to reading more of Kaufmann's stories in the future.