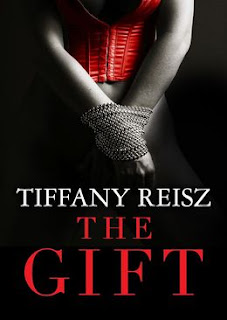 A trained submissive is lent out by her master to help one of his friend's cope with extreme loss in Tiffany Reisz's The Gift.

Previously published as Seven Day Loan, this re-released book is part of the Original Sinners series, which includes The Siren, The Angel and The Prince. In this novella, Eleanor, a young submissive and the lover of a mysterious man known only as "him," spends one week with her master's friend while he is out of town in Rome. Shut away from the world as he recovers from the death of his wife three years earlier, Daniel hopes she will help him open up again.

Fair warning, though: If you are squeamish and freak out easily, you might want to pass. Eleanor took a bigger beating than my beloved Huskers took during the B1G 10 Championship game.

Eleanor was a strong and independent seeming woman, which was intriguing, because she is also a person who plays the submissive role in a relationship. At the same time, Daniel proved to be sweet, and I truly felt an attachment to him given the short amount of time we all spent together.

Without giving away too much, I was very much into this story and loving it, until the ending. I'm a simple woman. I love romance novels, and one of my expectations is a happy ending. This novella did not give me that happily ever after. However, with three full-length books up ahead, perhaps it will happen. If I find a pocket in my reading schedule, I would like to check out the rest of the series with hopes of my HEA.