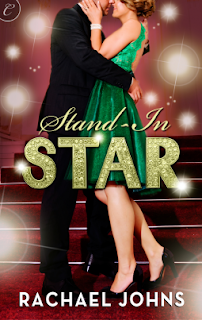 A cultural anthropologist makes a unique study of people -- particularly a hunky photographer -- when she spends a week in Hollywood during award show season in Rachael Johns' Stand-In Star.

Holly McCartney leaves her home in Australia to spend a week in Los Angeles to potentially accept an Oscar on behalf of her deceased and long-estranged sister, Daisy. Carrying the guilt from never making peace, and still hurting from the betrayal that caused the rift, only loyalty to her parents can take her halfway around the world to face these demons. When paparazzi descend Nate Devlin, an ex-paparazzo and friend to Daisy, swoops in to the rescue.

Nate was given a skewed version of the conflict between the sisters, which means he carries animosity for the beautiful woman now in his charge. Warring with the growing attraction for this woman, he also wants to confront her about what he perceives as unfair treatment of his old friend. Sparks fly when both are forced to face elements of their past and their physical and emotional connection.

As an award show junky -- I would call them my Super Bowl, but as a fan of football, the Super Bowl is my Super Bowl -- this book instantly appealed to me. Throw in an Auzzie traveling to Tinsletown to represent her deceased sibling at the Academy Awards, and I was reminded of the buzz surrounding the late Heath Ledger during his award wins, and I was intrigued.

The sizzle in this story was strong. There is instant attraction between the leading characters mixed with a healthy dose of skepticism each has toward the other. This mixture created great sexual tension for the reader to wonder "will they, won't they." This is a romance, though, so of course they do, and the pay-off was worth the wait.

Holly is a likeable character, who proves to be more forgiving and kind than I would have been in her situation. Based on the details behind her sister's betrayal, I understood why she had been hesitant to have her sister in her life. No matter what caused Daisy to do what she did, there is no valid reason for anyone to do that to someone they care about, at that time and in that way without expecting a bad reaction. Especially not to a sister. (I hope I'm speaking cryptically enough not to give away what happened, but also clear enough not to leave you wondering.)

Still, Holly proves what a nice person she is, not only by ultimately forgiving her sister and speaking well of her, but in the way she treats everyone from Nate's housekeeper to his sister. You just knew this poor girl was going to have her heart broken again at some point.

Nate was a little tougher for me. Even though he seems to possess a relatively good heart, this was initially negated by his immediate judgement of a situation he only knew one side about and his preoccupation with getting Holy into bed. After learning more about his past and the circumstances that brought him to his present, he earns back some of those good points he lost earlier on. Still, I think he got off the hook a little too easily.

I'm a fan of making men grovel and pay. Even if he happens to be really, really ridiculously good looking.

Though a romance novel at its core, the story also gives the characters valuable lessons beyond finding love. Holly learns to never take a day for granted and the importance of forgiving if not forgetting. Nate learns that while history may contribute to your future, it does not have to define it.

A fast-paced book, with enough elements of surprise to keep it from being predictable, this was a quick and fun read. With plenty to offer fans of love stories and the glamor of Hollywood, Stand-In Star is a solid story to pick-up as award show season begins.

For more information about Stand-in Star or Rachael Johns, visit the Carina Press website and the author's website.