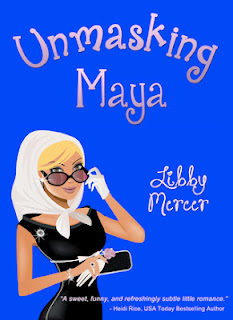 After being publicly disgraced and told, "You'll never work in this town, again," a fashion designer finds a new life and romance under a new identity in Libby Mercer's Unmasking Maya.

Maya Kirkland -- at least that's the name she is going by now -- lands a major career opportunity when she is commissioned to create art for one of the hottest start-ups in Silicon Valley. While trying to make a new name for herself as an artist, she also wants to stay under the radar as much as possible.

Technological wunderkind Derek Whitley sees right through her mask. After a Google search turns up no history for Maya, and based on his own hunch about his background, he is intrigued and on guard with the woman creating textile art in his building.

Thrown together constantly, sparks fly between Maya and Derek. But each of them is keeping a secret from the other. Will their eventual truth bombs be too much for their chemistry to build into anything more?

A short and fast moving love story, Unmasking Maya was a light and entertaining read. Mercer weaves together a story mixed with mystery and romance, and she pulls it off well. Instantly, the reader knows Maya has a secret, and though she hints at what that might be, we are kept in the dark for much of the story, just like Derek and everyone else. At the same time, we also know there is more to Derek than meets the eye.

And can we talk about Derek for a moment? He is totally adorkable, fulfilling his crushable geek role to perfection. From his nerdy shirts, which are supposed to be ironic, to the love affair he has with the latest iPhone model, he has hot young computer exec written all over him. Without being too much like him, Derek reminds me of Sam from Sophie Kinsella's I've Got Your Number. And I mean that as the greatest compliment, because I'm still swooning over that driven and brilliant career-man a year after reading the story.

For her part, Maya made an intriguing narrator. Though she was instantly likeable, and I found myself wanting to be her buddy and pulling for her, she became more interesting, because I knew she was hiding something. Unreliable narrators, when done well like in this instance, always keep me hooked. Though on the surface this was a story about love and redemption, this element also gave it the feel of a small mystery, which the reader has to resolve.

This was a fun, well-crafted read that had me laughing out loud and OMG-ing over and over during the hours I spent enjoying it.

Be sure to also checkout my review of Mercer's Fashioning a Romance (here), and her guest post about author's and their cats (right here).

About the Author
Born and raised in the Midwest, Libby Mercer’s adventurous spirit kicked in after graduating from high school, and she’s since lived in Boston, NYC and London. San Francisco is the city she currently calls home. For several years, Libby worked in fashion – first as a journalist and then as a shopkeeper. She also dabbled in design for a while. Even through the crazy fashion years, Libby never let go of her dream of being a published author, and has since developed her signature writing style, crafting quirky chick lit/romance hybrids. Fashioning a Romance was her first published novel, and Unmasking Maya will be her second. Libby has a third novel, The Karmic Connection, scheduled for release in 2013.