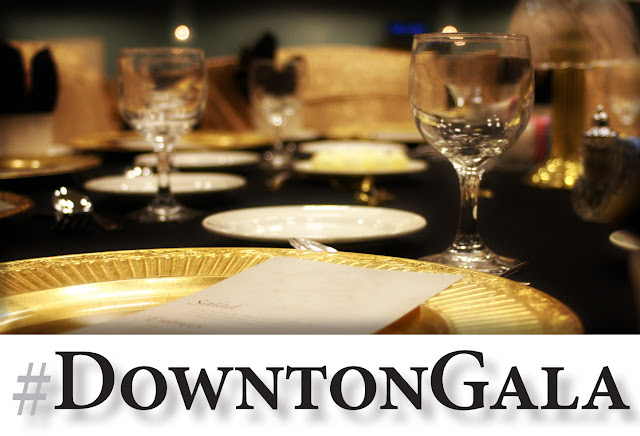 Blogger's Note: With the American premiere of Downton Abbey's third series days away, eight fabulous Chick Lit authors/bloggers and I decided to celebrate the occasion with a blog hop and giveaway, not to mention a Twitter party Sunday (#DowntonGala).

Be sure to scroll to the bottom to find out more about the prize and how to win it. Also, be sure to check out the other eight posts to increase you chances of winning and to maximize your entertainment.

With that, excuse me a moment while I don the latest fashion, channel my inner Mary Crawley, grab a cup of tea and make my grand entrance.


You're planning a dinner party for the Downton crew - who would be No. 1 on your invite list?
This is a classic dilemma we ladies face time and time again. Do you pick your best girlfriends or your crush? Now, the feminist in me, who typically picks chicks before dicks (yeah, I said it), has recently found herself at war with an ever-aging spinster within who does not want to die alone. Do I call Anna Smith Bates to soothe my soul with girl talk or Matthew Crawley to light a fire in my tummy?

I suppose I'll go with the other person in me who loves watching hot messes unfold while making snarky comments with her buddies: Lady Violet, dowager countess of Downton, will you please accept this rose and the first invitation to dinner? You can sit by me and we'll talk smack about what everyone is wearing, who they are dating and even throw a couple of jabs at the help if it comes to it.

Besides, my BFF Anna is such a dear, she won't mind taking the second invite.


Whose closet will you raid before the party?
This one is easy. I'll pillage the crap out of Lady Mary Crawley's wardrobe before she can say, "I'm in love with my cousin."

I'll wear this little outfit while I prepare for my guests: 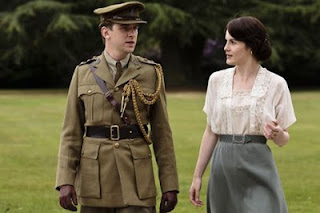 This hat, because a lady can never have too many hats: 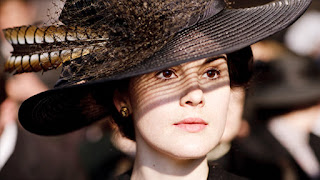 And then I'll slip into this little number before our pre-dinner cocktails: 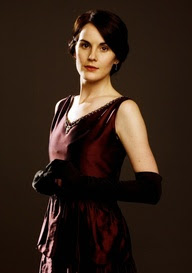 Mary has such a classic and elegant style, and I love it to death. Plus, her hair is divine.


Once your guests have arrived, who are you most likely to flirt with?
Again, do I go for looks, money and status or a mysterious past? I was initially a Bates girl who graciously dropped him so my bestie could put a ring on it. Then, I went on to fall for Matthew, because the dude is a fox with beautiful eyes. But going into series three, I'm putting my eggs in the Tom Branson basket. He may not have a title or know how to get the creases out of my slacks, but you get brains, looks, rebellion and the heart of a romantic Irishman with this hottie.


Who will you likely smack before the dessert course?
As much as I love to hate the sneaking and conniving Thomas and O'Brien, they're much too cunning for me to take on. Seriously, those people will ruin your life if you get on their bad side, and I'm no fool.

I almost feel bad saying it, but what the heck, I'm going for it: Lady Edith Crawley. Though part of me does feel a little bad for her (Will this girl ever get a break?), she does not do much to better her situation and is a bit of a dick. It's hard for me to feel TOO bad for her.

Plus, by this point in our festivities, I've switched from my tea to a glass or four of champagne, which means I'm a loose cannon. Who am I kidding? There never was any tea in my cup. It was a light-colored wine. Lady Edith, prepare for a verbal or literal bitch slap. I don't care that you haven't had any of the chocolate souffle.

Oh, and Thomas! Would you be a dear and refill my champagne glass?


Let's adjourn to the drawing room for some not-so-polite conversation: What's your theory on Patrick Gordon aka The Bandaged Man? Impostor or legitimate Crawley?
Ugh, this was maybe my least favorite development on any episode of Downton Abbey. The dude was here one day and gone the next, but was unwilling to really show any evidence of who he was. Not a very well-developed story arc. Maybe it has to do with my annoyance with Edith or the fact that I really didn't care about this plot line when you had enough other more appealing drama to compete with, but my heart was never really in this one.

For the sheer fact that I don't ever want to come back to this poorly developed story arc again, I'm going to say he's an imposter. If he was the real Patrick, the guy should have grown a pair and given some proof. This is almost the 1920s, for crying out loud. You have to work for what you want!

Sigh. Did I mention that too much wine also makes me a little chatty and emphatic? It's a wonder I haven't accidentally spilled any of it on the carpets.


How about Bates? Did he do it? Could he do it? If not, who killed Vera?
Nope. Bates is a nice man with a nasty habit of never fighting for himself. Plus, while Anna was curling my hair, she told me all about his innocence, and I'll always trust a woman who can properly coif my hair.

I'm of the belief Vera offed herself, because she knew her life would never get better. In going the way she did, she wanted to take down her ex-hubby in the process. Knowing death was easier than a life behind bars, she framed him.


Favorite quip from the Dowager Countess?
"Why does every day involve a fight with an American?"

I'm an American, but the way Dame Maggie Smith delivers the line makes me want to shout, "here, here."

Can we just take a moment to reflect on the beauty that is Maggie Smith's performance in EVERYTHING? (pause) (reflect) (pause again) OK, thank you. Thomas, more wine!


Favorite Downton spoof?
Jimmy Fallon's "Downton Sixbey" (watch episode one here and two here) will always be my favorite, and I lose it every time I watch Stephen Colbert's "Breaking Abbey" (watch it here). However... in the interest of being a little different and giving a shout-out to my first dinner party guest, here's Sh!t the Dowager Countess Says:

And please oh please do not go and watch this on YouTube, because there are season three spoilers in the sidebar!

You can also watch some other great ones here and here. If you know someone who needs to figure this story out, go ahead and show them The Boyfriend's Guide to Downton Abbey here.


Now you've done it! You've landed a guest spot on the show. What's your storyline?
A troubled American writer seeks refuge and anonymity in the English countryside as she recovers from yet another rejection letter. While dining in the village's pub, she witnesses something that would shock Lord Grantham and his entire household if word got out. In exchange for her silence, she takes up residence in a cottage on Downton Abbey's grounds, receiving a living stipend for her trouble and use of one of the handsome stable boys. Then she, or rather I disappear with no explanation from any future episodes like Patrick Gordon (see my rant on that above).


What would you like to see happen in series three?
Let's get Bates out of prison already, and if it's not too much trouble, could Matthew and Mary have a baby? Please and thanks.

And with that, I've clearly had too much wine and should hit the sack. But first, it's your turn. Whose closet will you raid before the party?


Post your comment by midnight Jan. 10 for a chance to win a copy of To Marry An English Lord by Gail MacColl and Carol McD. Wallace. The winner will be announced Jan. 11.

Also, check out the answers from the other bloggers participating in the Q&A and Giveaway. Post your answer to their questions to increase your chances of winning. We'll talk Downton again on Twitter, beginning at 7:30 p.m. CDT on Sun., Jan. 6. Use #DowntonGala to follow the feed.


About To Marry An English Lord by Gail MacColl and Carol McD. Wallace

From the Gilded Age until 1914, more than 100 American heiresses invaded Britannia and swapped dollars for titles–just like Cora Crawley, Countess of Grantham, the first of the Downton Abbey characters Julian Fellowes was inspired to create after reading To Marry An English Lord. Filled with vivid personalities, gossipy anecdotes, grand houses, and a wealth of period details–plus photographs, illustrations, quotes, and the finer points of Victorian and Edwardian etiquette – To Marry An English Lord is social history at its liveliest and most accessible.

Email ThisBlogThis!Share to TwitterShare to FacebookShare to Pinterest
Labels: prize