Blogger's Note: I'm bringing Reading in the Kitchen back in house (easier maintenance). So, I'm posting a couple of the recipes that ran on the other site to have them here. This is post three of four in my attempt to recreate a meal from Nora Roberts' The Villa. 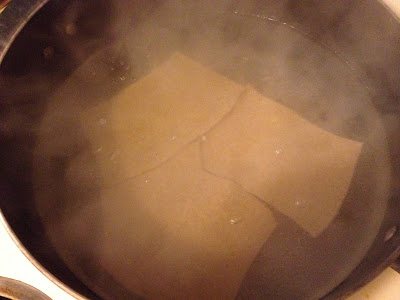 If you joined us last week, you will know from my tipsy post that I decided to break down the recipe I tried, and failed, to make in the fall.

It's the manicotti dish Pilar Giambelli whips up for her new gentleman friend and his children in The Villa by Nora Roberts. The culinary goddess she is, Pilar manages to pull off the meal, antipasto and tiramisu in one night. I confess, I'm no goddess. So we're breaking down this recipe to avoid another disaster.

Today, we're making homemade manicotti noodles to go with the marinara from last week. They took me an evening to make, so they get their own post.

To research this recipe, I relied on cookbooks from my mom and dad, not to mention lots of Google searching. The one I ended up using most for the base of this recipe was one from the Cooking Club of America's Pasta Recipes & Techniques. In this book, they refer to manicotti as cannelloni, or long reeds. To make it, the thinnest sheets of pasta are cut into 3 1/2 x 4 1/2 inch rectangles and stuffed with various fillings, according to the book.
The book also shared a little history lesson on stuffed pasta, which manicotti certainly falls into.


Raviolli, originally called "rabiole," seem to have been a precursor to other types of stuffed fresh pasta. According to food historian Waverly Root, ribole were invetned by the Genoese, a seafaring people, as a means of recycling leftover food aboard ships: leftovers were ground into fillings and stuffed inside pasta dough.

Interesting, right? I don't know about you, but I had never given much consideration to what people did with their leftovers in the past. It's not like they had fridges or microwaves. Knowing that some of the foods we eat, today, originated back in the day fascinates me.

With the history lesson complete, it was time to get cooking.

Before getting into how manicotti is made, let me tell you this. Making homemade pasta is not hard, but it is a lot of work. You will need plenty of counter or table space and the right tools. I had adequate space and not all of the tools, but I made do. I'll be sure to mention what you should use and what I used to make this as we go through it.

Because I am not a professional chef, instead of making hollow tubes, I created flat sheets. These flat sheets will be used to wrap the stuffing in next week's post, like one would a burrito. I wanted to make about a pound of pasta for this recipe, or 24 manicotti shells. 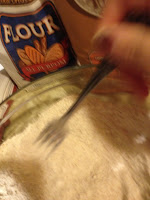 The ingredients I used for the dough were:
1 1/2 cups of whole wheat flour
1/2 cup of unbleached all-purpose flour
3 extra large eggs
2 tablespoons of extra virgin olive oil
1 tablespoon of water

You'll notice I decided to make whole wheat pasta. If you're not watching your figure like I am, or you just don't feel like buying the wheat flour, go ahead and use 2 cups of all-purpose flour.

First, mix the dry ingredients together in a bowl (not hard when it's two types of flour) and then pour it on parchment paper. Create a well. That's what cookbooks and recipes say, but for me, I like to consider it making a volcano, then carving at the caldera. However you consider it, the point is their should be a circle of flour with a crater large enough to include your liquid ingredients.

Beat the eggs together in a bowl and pour into the well/caldera/crater. My volcano was apparently unstable and erupted, which means my egg mixture flowed out of one side like lava. This was moderately annoying, but didn't ruin the recipe by any means. 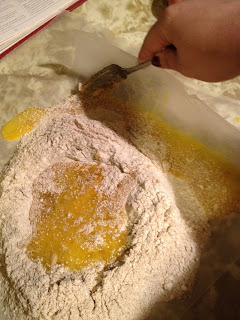 With a fork, slowly add bits of flour to the eggs in the center. Keep in mind, if you're using whole wheat flour, this is going to get thick and grainy fast. At this point, introduce some of that olive oil.

Continue forming that sticky mess into a soft ball. Again, because this was whole wheat, I noticed the flour was not as sticky as it was when I made mushroom ravioli (read about that here). I added a tablespoon or two of water, but did not notice much difference. 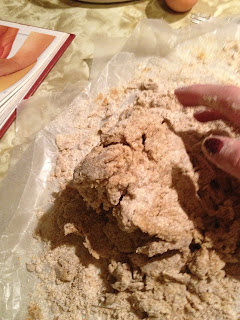 Then you'll need to knead it. This is the part that always makes me feel like a bad ass who knows what she's doing. I don't, but I pretend I do, regardless. With this being wheat pasta, my various sources said I would need to knead it for about 15 minutes instead of 10. This was hard work, folks. It's great exercise for your arm muscles though, and no pain no gain, right? 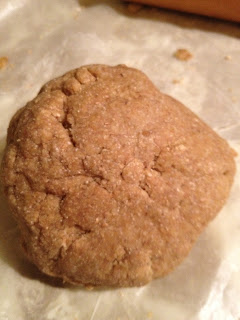 Once it was reasonably formed, and I'd kneaded the crap out of it, I let it sit on the counter under a bowl for 30 minutes.

After that, I broke the dough into six pieces. Using a rolling pin, I rolled this dough as thin as I could go. That was also tough work, because this dough was particularly thick. If you have a pasta machine, you would use that instead and likely have better results. Once I made each of the six pieces as thin as I thought they could go, I cut them into fourths using a pizza cutter. This seems to be the legit equipment suggested by the book, so party on. At this point, I again used the rolling pin to see if I could get them any thinner, and -- huzzah -- I did. 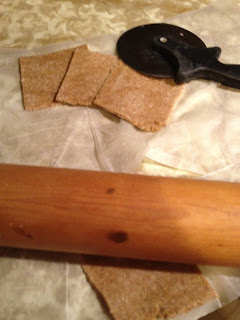 About 10 minutes before you plan to cook the pasta fill up a large pot with water and a little salt. Bring it to a boil. Place about four pieces of pasta in the pot at a time. This is fresh pasta, so you only cook it for a couple of minutes. Carefully remove the pieces with a spatula or fork. I learned that using a collander for pastas like lasagna and manicotti can actually damage the pasta, so lesson learned. Place the pieces on a towel to dry and repeat the process. 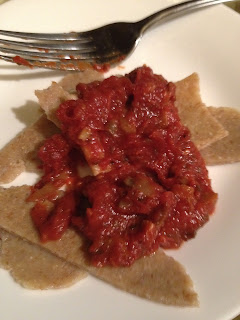 By this point, it had been a couple of hours, and I knew I was not going to bake the dish. I was also a little discouraged, because the noodles didn't look as beautiful as my first attempt. I have to keep reminding myself that this is whole grain pasta, so it's never going to look the same as your standard noodles. I layered the manicotti in parchment paper, placed it in tupperware and refrigerated it until I made the stuffing.

I did take a couple of scraggly pieces leftover from the rolling and tried those with a little marinara. I'll tell you this: it may not look pretty, but it tasted just like the whole wheat pasta I buy from the store. Maybe a little better.

So I'm calling that a success. Be sure to check back next week to see how I put the manicotti and marinara together with cheeses to make baked manicotti.