Blogger's Note: After reviewing Julie Smith's Death Turns a Trick, yesterday (read it here), I'm pleased to bring you this guest post. Based on the nature of the book (read an excerpt here) I wanted to know: What kind of research did she do about the working girls? 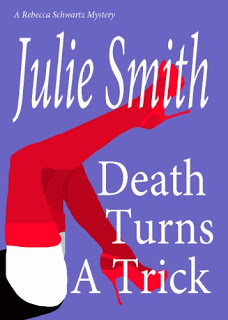 When your book is called Death Turns a Trick, you know you have to talk about turning tricks! Though I probably should mention that wasn’t a title I’d have ever picked. The publisher just thought it was a subject that would grab people.

It sure grabbed me. The average mystery writer probably doesn’t know that many hookers, but there was a time when I did, by virtue of my job, reporter for the San Francisco Chronicle. And—big surprise!--I found them a fascinating bunch. I knew them two different ways. First of all, I often reported on a real and apparently sincere organization that billed itself as a “hookers’ union”—I’m serious, a hookers’ union!—called COYOTE. Call Off Your Old Tired Ethics, get it? Nobody ever asked who they were supposed to negotiate a contract with, but in fact nobody ever asked them much at all, except to please keep talking because they were so quotable—and, okay, pretty funny. (On purpose, I think. )

COYOTE was founded by the colorful and brilliant Margo St. James, a character and a half who hung around the Chronicle bar called Hanno’s in the Alley, dated reporters, and eventually married Paul Avery, the reporter hero of the movie Zodiac. Margo had a face as long as an anteater’s, and, truth to tell, looked a bit like Olive Oyl, except kind of elegant. When I first met her, long before she founded COYOTE, she had some kind of semi-respectable job—she was a publicist, I think—although she claimed to have been a hooker back in the day. Ha! Rumor had it Margo never turned a trick in her life, and I’m inclined to believe it. But she was one smart cookie, publicity-wise, and when she came up with COYOTE, she had the entire Bay Area press eating out of her hand.

What she did was, she repositioned prostitution as “a feminist issue.” Sorry about the quotes, Margo, if you’re reading this. But who’s gonna take that seriously? I mean, isn’t it a bit more feminist to get a good education and a job as CEO of IBM? I’ll never forget the time she thought I hadn’t been kind enough in print to one of her protégées and she felt called upon to lecture me about something she called “horizontal hostility.” Trouble with that one? Me too—I think she meant people being mean to the oppressed minority who make their living lying down! It was pretty hard keeping a straight face, even while being lectured. To tell you the truth, “horizontal hilarity” came to mind.

So that was Margo. The other way I knew about hookers was through a story I did called “The Wages of Sin,” about how fancy call girls made, spent, and managed their money. “Paulette” was my favorite interviewee—a truly gorgeous, hugely cynical, and smart, smart blonde whose signature move was to sit in bars in fabulous cocktail dresses drinking milk. She had a beeper way before cell phones and when she’d get a beep, she’d get up in mid-interview or milk-sip and squeal, “Hot date! Gotta go!” And she was out of there. Whereas Margo may have been a bit on the fake side, horizontally speaking, no question Paulette was the real thing. I pretty much worshipped her—for her beauty and smarts, sure, but so much more for her down-to-earth-ness, her realism. She knew she had to get out of the game—and she talked about how all hookers do. And she was pretty much a laugh riot. Well, they both were—Paulette and Margo.

And so, years passed and I wrote a book about a hookers’ union called HYENA. Head Your Ethics toward a New Age, get it? There’s a bordello in it, and a number of fancy call girls. The heroine is a little like me, a professional woman on the outside looking in—in this case, Rebecca Schwartz, HYENA’s lawyer. I didn’t actually have to call either Margo or Paulette for new insights—I’d been riveted by everything about both of them and I remembered everything they said. In detail. Wouldn’t you?

But my heart skipped a beat one Saturday morning when my phone rang, waking me up—don’t hookers sleep late?—and a voice said, “Julie, this is Margo. I just read Death Turns a Trick.” I was speechless. She could be such a scold! Who could forget “horizontal hostility?” What was I going to say?

But no problem, she kept talking. “I thought it was funny as hell. You really got it.”

Phew! Now that WAS a compliment! 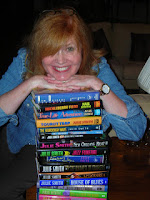