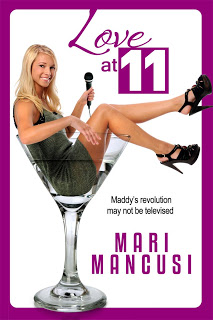 A news producer lands the story of her lifetime, and the man of her dreams, in Mari Mancusi's Love at 11.

The long-suffering producer of a local TV news show in San Diego, Maddy has the chance to finally sink her teeth into some serious stories when she is added to an investigative journalism team. Though she still has to cover some of the more far-fetched stories that will look good to advertisers, she also has the opportunity to dig deep.

At the same time she is partnered with a sexy new videographer. Even though Jamie is off the market, Maddy cannot seem to help herself when it comes to wanting him. In addition to a forbidden romance complicating her life, she must also deal with the ramifications of her family falling apart. When he work and professional life come crashing together, she must find a way to find a resolution to both.

As an ex-journalist (a loose term, I only worked in newspapers for two-and-a-half years), there are few things I love more than a good story about a journalist getting into the nitty gritty. Add in the mystery and intrigue that comes from the main character cracking a major case, and I was gripped.

Though I do not know much about broadcast journalist, all of the issues were relatable. Journalism is a changed industry where finding advertisers often matters more than breaking good stories.

Even non-journalists should be able to relate to Maddy's key issue: She has bigger aspirations for her career than her current life will allow. She is a somewhat flawed character, but one who recognizes and owns up to those flaws, which makes them almost disappear in the eye of the reader.

The trouble in Maddy's family life blended well with the major story she was focused on covering, particularly in regards to her little sister. The drama that came from her parents provided an interesting and adequately complicated catalyst to spur the major tension forward.

(I'm speaking in riddles here, because I do not want to spoil this part of the story.)

The romance in this story was sweet, but as complicated as the rest of Maddie's world. Her chemistry with Jamie was obvious from the get-go. And there were several moments that had me audibly echoing Maddie's own, "Oh my Gods" as I wondered how these two kids were going to get together.

A fast-paced read that had me turning the pages, Love at 11 was a fantastic blend of intrigue, romance and entertainment that pushed me to the end, which tied up nice and neat.

**Everyone who leaves a comment on Mari’s tour page will be entered to win a Kindle Touch! One bonus winner will win a $10 Amazon gift card! Anyone who purchases their copy of Love at 11 before February 25 and sends their receipt to Samantha (at) ChickLitPlus (dot) com, will get five bonus entries. Use the Rafflecopter here to win! ** Please note this is open to US citizens only.** 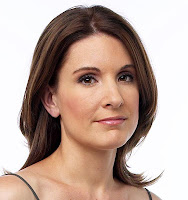 Mari Mancusi is a multiple Emmy award-winning television producer and author of novels for adults and teens. She’s worked at television stations in New York, Boston, San Diego, and Orlando and is a graduate of Boston University’s College of Communications. When not writing or producing, she enjoys traveling, cooking, 80s music, and her favorite guilty pleasure—videogames. She lives in Austin, Texas with her husband Jacob and their daughter, Avalon.