excerpt of 'when i see you'

Blogger's Note: Enjoy this excerpt of Katherine Owen's When I See You, which I will review later, today. Be sure to check back tomorrow for more from the author. 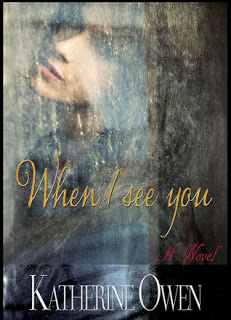 She believes that love can never last, promises are usually broken, and true happiness is extremely elusive in the long run. He believes most risks are worth taking, the promises he makes can be kept, and love doesn't factor in his relationships any longer. They're both wrong.

Jordan Holloway has never fully recovered from the unexpected deaths of her famous Hollywood parents. At 27, she is still slow to trust and remains uncertain about the true duration of love and happiness. Yet, it's been four years since she fell in love with Ethan when he rocked her world even as he marched off to war leaving her alone with their young son Max. Now, Ethan tells her this will be his last tour in Afghanistan and that soon the three of them will be together. Still anxious at his leaving again, Jordan extracts a promise for Ethan's safe return from Brock Wainwright, her husband's sniper partner and best friend. But, can she put all her trust in Brock and can he keep such a promise?

At 29, Brock Wainwright fully embraces the dangerous life of a Navy Seal. He enjoys his freedom and not being committed to anyone; and, there's been a long line of women who can attest to that. Everything changes for Brock after he meets Jordan. When the two men return to Afghanistan, Brock's intent on keeping his promise to Jordan about keeping Ethan safe for a variety of reasons, including the most disturbing one of all, he is more than just attracted to his best friend's wife. This revelation plagues Brock on the battlefield and in a violent moment changes everything.


An hour later, the household has been fed French toast, and all the adults have been replenished with multiple cups of Brock’s strong black coffee. Max is busy showing off his swing set and sandbox to the clearly hung-over Ashleigh and his daddy. I watch my son as he constantly pulls at Ethan’s outstretched hand. His unmet need for Ethan’s attention brings tears to my eyes, but our child’s enthusiasm is contagious. I can’t help but smile, when I hear Max call out, “Look at this, Daddy; look at this, Ashleigh,” in his sweet, elf-like voice. I gaze at the three of them through the open French door that leads to the backyard and feel this surge of love for my little family.

A half hour later, Brock peruses the Los Angeles Times, while I decorate cupcakes for Max. Decorating cupcakes has become my signature specialty within this small community of Malibu. It’s kind of a sideline hobby to my real job as head chef at Le Reve.

I look up. Brock watches me with the rapt interest similar to that of a small child. It reminds me of Max when he’s mesmerized with a television program like Big Bird or Barney. The newspaper is folded up and lies next to his forearm.

I slip up with the icing under his studied scrutiny and attempt to refocus upon the task at hand by breaking eye contact with our unexpected house guest.

“Ethan tells me you studied at CIA,” Brock says. “That you’re a head cook, here in Malibu. At Le Reve, is it?”

I glance up from what I’m doing and nod, but looking at him is worse. The man continues to interfere with my ability to concentrate on the cupcakes for some reason. I glance away from him, intent on getting back to looping blue icing across the little cake’s surface in a circular pattern, making ocean waves. I’m going for a Finding Nemo theme, per my three-year-old’s request. He’s taking the cupcakes to his play date with his friend, Davey. I hold my breath in an attempt to drape the icing in a steady wave pattern.

“Head chef at Le Reve. Before that, head chef at Rivera,” I say. “And before that, I worked at L’Ecole in New York, even a summer in Paris.” I lift my chin in defiance and can feel myself blushing. Why do I feel the need to provide my resume to this guy?

“Chef,” Brock says with a wide smile. “Sorry, you gourmets are so touchy about titles.”

“It’s a big deal in the culinary world to be a head chef. It takes years to get that title and the responsibility that comes with it.” I shrug, trying to give off an air of indifference, but even I can hear the edge in my voice.

I put down the pastry knife, somewhat disconcerted to be asked about the restaurant. Ethan sees it as a drain of my time away from Max, away from him when he’s here. Le Reve is a source of tension between us every time he’s home.

“There’s a certain energy and excitement in running a restaurant every night. You spend your whole day preparing and planning, and then, the satisfaction of execution on a nightly basis is exhilarating. Almost spiritual.” I smile over at him. He gets this disconcerted look. “There’s nothing quite like it. Le Reve is small, only eight tables, but people come from all over to eat there. We have a good thing going. My boss, the owner, Louis DuPont, is from Paris. He’s amazing and gives me a lot of flexibility. It’s close by. Ashleigh or Mrs. Richards watch Max in the evening, and I try to be home by midnight or so.” My voice trails off at the thoughtful look on Brock’s face. “What?”

“Isn’t it kind of hard to juggle all of that with Max?”

“It works. I don’t know any other life. Of course, Ethan would prefer me to work part-time and be home with Max more.” I hesitate, before saying, “Running a restaurant, making decisions about food, and preparing it is cathartic for me. I need to do it.” I pause, experiencing misgivings about saying anything more, but somehow, needing to. “Ethan was gone when Max was born. He’s been home three times in the past three years. I have a life. Here. In L.A. It works.”

I sweep the pastry knife across the air in agitation and openly blush, knowing I sound too defensive. I take an unsteady breath. I’ve given too much away. “We make it work,” I say in a low voice.

I look over at him. He’s shaking his head. I’m unable to look away.

“You just don’t know how rare you are. I think it’s great that you have a career and still manage things with Max.” He frowns. “Most women wouldn’t put up with the long tours away from home. It wreaks havoc on a relationship. It takes commitment. Trust. It’s rare.”

“Relationships are hard, no matter what the circumstances,” I say.

“You think so?” Brock asks. There’s discernible disquiet in his tone.

The ground seems to shift beneath me. I reach out for the counter to steady myself. Yet, I’m unable to stop myself from saying more. “We sailed into marriage with all these dreams and made all these promises. We were so naive. Within fifteen minutes of meeting him, I knew how I felt about him and how he felt about me.” I try to smile. “He swept me off my feet and I didn’t hit the ground, until I was standing at the airport and watching his flight to Afghanistan take off.” I smile, but then, it fades.

“At that moment, I’d never felt so alone in my life. And, there have been other times when I have felt pretty much alone.” I stop, take an unsteady breath, and close my eyes, remembering the death of my parents and that exact moment when Ethan left the first time. I open them and he’s staring at me intently.

“Alone. Eight weeks pregnant. Ashleigh and I had been in L.A. for a couple of years already. Then, I’d met Ethan and everything changed,” I say in a low voice. I gaze over at Brock and then shrug my shoulders, attempting to lighten the mood at seeing the disconcerted look on his face. “But nothing really changed. Do you know what I mean?”
“Yes.” Brock looks even more troubled.

“What?” I ask with growing trepidation.

“I was engaged once. It didn’t work out.” A shadow crosses his face. “I dropped out of my last semester of law school and signed up for SEAL training, then sniper school. My father wasn’t too happy.” Brock gets this bleak look. “Relationships are hard whether you’re in L.A. or Austin.”

Ethan and Brock both grew up in Austin. I pause in mid-air with my pastry knife, realizing that this is one more thing that Ethan hasn’t really shared with me. I don’t really know much about his life in Austin, before me. We rarely go there because his time is so limited when he’s home.

“I’m sorry. About the fiancée. About your dad,” I say.

“I got over it. I moved on.” He shrugs and looks indifferent.

“Is that why you go through women like they’re an endless supply of shaving razors? To defy your father? To prove you’re over her?”

I blush at my bluntness.

“I suppose so.” He tries to smile but it doesn’t reach his eyes. I sense this profound sadness in him. “But razors aren’t as sharp. Never disappoint. Never maim. Not intentionally, anyway; and don’t require commitment.”

Leave a comment on Katherine's Chick Lit Plus tour page (click here) for your chance to win a $20 Amazon Gift Card.

Katherine Owen graduated with a journalism degree and a minor in English from the University of Washington and promptly went into high tech sales because someone told her it was fun and there would be stock options. For years, she damped down the urge to write and spent money like Evian water. But after a successful, storied career in high tech sales and public relations, she finally made what felt like a necessary, soul-calling leap to writing full-time in April of 2009. Owen has written three novels Seeing Julia (debut novel and Zola Award Winner), Not to Us and When I See You. She lives near Seattle in an old house with a fabulous view with her husband and two children. When she isn't writing, she can be found cheering at her son's football games or her daughter's volleyball games or heating up frozen dinners for the "fam-dam-ily" as she fondly refers to them.

In all these social media places, she talks about her writing life and what inspires her as well as her novels and, sometimes, her latest work-in-progress.