excerpt: stuck on you

Blogger's Note: Before reviewing Heather Thurmeier's Stuck On You, the sequel to Falling For You (read my review here), here's some information on the new book and an excerpt. The new book was released this month. Check back later, today, for my review of it. 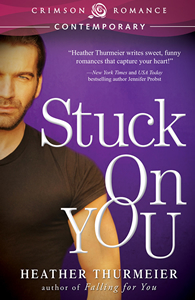 Paige Anderson agrees to be on a new reality show called Treasure Trekkers, a show where contestants use handheld GPS units to find hidden caches filled with prizes, with her good friend Cassidy. But when Cassidy is unable to compete, Chip Cormack, the show’s producer, steps in with a last-minute replacement to be Paige’s partner—Zoe Oliver, reality TV’s favorite bad girl.

Jack Miles (aka Miles) is a mountain climber with the body to prove it. Miles convinced his climbing partner Ben to come on the show with him for one reason—to prove to Ben that they can still hike together, regardless of the fact that Ben lost his foot in a tragic accident. Miles isn’t about to let anything get in his way of winning—not even beautiful Paige.

But when Miles and Paige are thrown into an alliance with their teammates, working closely together leads to more than just good strategy. Can Paige steal Miles’ heart while surviving Zoe long enough to win the game?

“So you think I’m sexy?” Shocked didn’t even begin to describe how she felt about this new tidbit of information. Huh.

“Was there ever a doubt in your mind after the way you looked in the kitchen the other night?”

“Oh,” she said weakly, unable to think of anything more intelligent.

“Now, if you’d paired these heels with those tiny shorts and thin little tank top you wore that night...” He paused, leaning in closer. “Well, then concentrating on driving without staring into the rearview mirror would have been a real trick.”

His mouth hovered over hers, his breath tickling her lips.

I should say something...

“Good thing then, I guess. We wouldn’t want to end up in a ditch somewhere.”

He smiled. “As opposed to the ditch we’re in right now? No, I think I quite like this one.”

Miles lowered his mouth to hers, so softly she wondered if she’d dreamed it. She tilted her chin for a better angle and kissed him back. Her breath froze in her lungs as his tongue slipped into her mouth.

He wrapped his hand around the nape of her neck, positioning her head just how he wanted it, trailing a line of kisses along her jaw to her ear where his then nibbled. “This ditch is pretty awesome actually.”

She wished he would shut up and kiss her again. And she wished they were somewhere more comfortable than the ground. Not that the hard ground was much of a concern given the fact that Miles was currently nibbling on her neck and making good progress toward her collarbone. Every kiss sent another wave of heat quivering through her belly.

Then he kissed her again and there was no mistaking that he wished they were somewhere more comfortable too.

The sound of a twig snapping from somewhere near them broke their kiss. Evan stood only a few feet away, camera aimed right at their tryst happening in the woods. How had she forgotten Evan was here and that meant every moment with Miles was now caught on film?

Paige glared up at Evan. “Got that all on film?”

Miles climbed to his feet then pulled her to standing too, his arms wrapped tightly around her waist this time. “You wanna do me a favor and delete that footage?” Evan shook his head.

“I’m telling Cassidy.” It was a silly threat since Cassidy would probably love to see this all play out on TV like everyone else, but it was the only threat she had.

“Fine then, have it your way.” Miles picked her up, tossing her over his shoulder, then smacked her on the ass. “Keep the shoes. I’ll do this the hard way."


About the Author
Heather Thurmeier is a lover of strawberry margaritas, a hater of spiders, and a reality TV junkie. She was born and raised in the Canadian prairies, but now lives in upstate New York with her own personal romance Hero (aka her husband) and their two little princesses. When she's not busy taking care of the kids and an adventurous puppy named Indy, Heather's hard at work on her next romance novel.