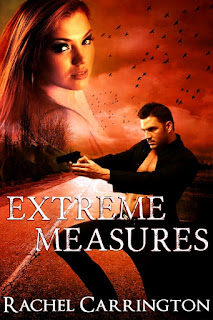 The past comes back to haunt a couple who thought they put it behind them years ago in Rachel Carrington's Extreme Measures.

Erin's life fell apart when her brother murdered her parents. In addition to losing her parents and the brother she once loved dearly, the murder investigation, trial and aftermath also led to her marriage ending. Though she never stopped loving her ex-husband and FBI agent Matt, she wanted a fresh start and didn't want to fix the severe damage done to their marriage.

Now, she needs her ex-husband's help again when her brother escapes from maximum security prison with his sights set on one thing: finding and killing Erin. Though he left her slip away once before, Matt is determined to keep her safe, even if being around her further hurts his still aching heart.

Together, they must try to stay alive and find her brother before more lives can be lost. And at the same time, they take a look at what tore them apart before and decide whether or not their feelings for each other are worth giving a life together another chance.

Filled with the action and suspense one would expect from a thriller, Extreme Measures did not disappoint in offering plenty of tension and drama that kept me turning the page. In addition to offering insights into Erin and Matt's minds, the story also tracked Stuart as he made his way toward his sister, which added an extra level of fear as I constantly wondered what horrible thing he might do next.

Another layer of tension came from the romantic history and lingering emotions between Matt and Erin.You could cut through it. My only real wish with this story is that we could have learned a little bit more about Matt and Erin's life before it fell apart. Though it wasn't ultimately necessary for this story, I confess it is the part I wonder the most about after finishing the book.

Almost instantly, I felt a connection to Matt and Erin and had a cheering section going for them. I often found myself more concerned about whether or not these two kids would figure out their differences and get back together than worrying about getting Stuart off the streets.

At the same time, their failed marriage and the long-lasting pain it caused -- and still causes -- both of them added something else to this story: sadness. Their misery was apparent, and more than anything else, I wanted them to find a way to be happy together again no matter what.

I'm forever a sucker for second-chance romance, not to mention a fan of a solid mystery or thriller, and this book was the whole package.

A fast story and even quicker read, Extreme Measures was a solid blend of suspense and romance with plenty of twists and turns along the way.

Be sure to check back tomorrow for my interview with the author.