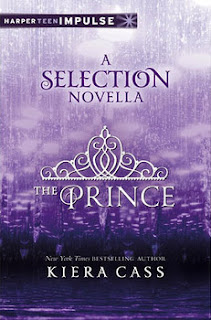 Prince Maxon is back and better than before in Kiera Cass new novella, The Prince.

The Prince is set during the weeks before and the first days of The Selection (read my review here), book one in Cass' futuristic dystopian trilogy that is billed as The Bachelor meets The Hunger Games. Instead, this story is told from the perspective of Prince Maxon, the young man America and thirty-four other girls are competing against in hopes of being named the future queen.

Beginning on his birthday and ending on the night of his first meeting the candidates of the Selection, this story gives the readers greater insight into one side of the trilogy's love triangle. And despite being a prince who lives an apparently charmed life, when the story begins he has ninety-nine problems and America ain't one.

He has a narcissistic, domineering, and controlling father. He has a loving and supportive mother, but one who keeps herself guarded. An old friend throws him a curve ball, which leads them to a falling out. Never mind the possible threat of rebellion, having to pick out a wife from a group of "randomly" selected girls and an uncertain future out of his control.

Through all of it, he hardly complains, plays the role of a dutiful prince, minds his manners and keeps his heart in the right place.

Let's face it, if I wasn't already Team Maxon after book one, I totally would have found this guy swoon-worthy after reading this book. I hope that in the next book Miss America realizes her good fortune at being allowed to spend time with such a decent guy and gets over her ex.

More than a gratuitous companion piece to satiate fans of the series, in many ways this short read added more character and plot development than The Selection. Far less self-involved, more aware of others and their feelings and actions, he not only made a more likeable narrator than America, he was also more sympathetic. During an email discussion with several of my writer buddies, our general consensus was that we wished the future books would be told from split perspectives so we could continue to have Maxon's input on the narrative.

My fellow Team Maxon fans will surely enjoy this short read, which left me feeling more excited about book two, The Elite, than I was after finishing book one.