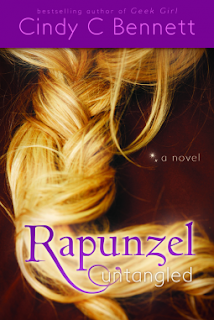 Rapunzel Gothel is the only child of a mysterious and overly protective woman. Told she severe combined immunodeficiency (SCID), she is kept in a tower away from the rest of the world, seemingly for her protection. Her long blonde hair also holds power to save the world -- or so she is told. But as she has grown older, Rapunzel begins to question her solitude and becomes increasingly curious of the outside world. Thanks to Facebook, she befriends a charming boy named Fane.

Though a modern retelling, complete with interaction via instant messaging, the writing of this novel still managed to capture the fanciful and storybook tone of a fairy tale. This was unexpected for a young adult novel, and created a greater impact. Though I do not have a lot of experience reading fantasy stories, I imagine this tone would sit well with fans of this genre, without alienating strangers like me, which makes for a universally solid story.

This story was fast-paced, filled with plenty of unexpected twists and turns while ultimately leading towards the happily ever after necessary with a fairy tale.

The character of Rapunzel was well-modernized, but like the writing, still kept those elements of mysticism and intrigue that belong with a fairy tale. Often naive and sometimes foolish, though incredibly intelligent and strong, her characterization was believable given how isolated she has been throughout her whole life.

As a fan of Disney princesses, I appreciated the little friendships she creates with some of the animals she comes across while living in her tower. This was a great nod to the traditional tales most of us are familiar with, while leaving plenty of room to introduce new ideas.

The love interest provided with Fane was equally believable, and his appeal, especially as seen through her eyes, was understandable. He represents the outside world and modernism that she has been kept from. Pair that with his sense of humor, good looks and intelligence, and he makes for a solid leading man.

One of my favorite parts of the story was Rapunzel and Fane becoming acquainted with each other early in the book. He tries to guess what the RG in her screen name stands for, and makes a reference to Rumpelstiltskin, which was one of my favorite stories growing up. For whatever reason, I have often paired these two stories together in my head -- likely because they are named for characters with fantastical names beginning with F -- and it was a nice nod to the existence of fairy tales, even if the traditional Rapunzel story does not exist in this world.

Their romance was a perfect mix of the fairy tale fantasy and modern teens that had some sizzle without crossing any lines to shock young readers.

This modern adaptation of Rapunzel succeeds in paying homage and consideration to the well-known tale, while introducing enough new plot elements and details to become its own unique story. Fans of fantasy, fairy tales and young adult stories should find an enjoyable and solid read in this.