excerpt of 'the wisdom of hair'

Blogger's Note: I'll share my review of Kim Boykin's The Wisdom of Hair later today, but first, here's an excerpt of the novel. Enjoy! 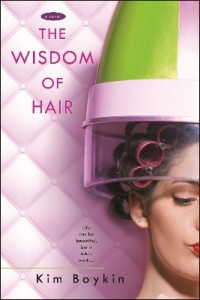 It was getting dark. I was afraid to stay any longer. I touched his cheek with the back of my hand so slightly; it couldn’t have felt like anything more than a whisper. Then I turned to go.

“Thank you,” he said. I froze. “For the dinner. Dinners.” I stood right by the picnic table and turned to face him in the twilight. I could tell by the look on his face that he didn’t know I’d spent the better part of my nights watching him.

“You’re welcome.” My own voice was so soft I barely heard it myself. I wanted to say something, something meaningful that would cut though the whiskey and stay with him forever.

“Don’t stay out too late. It’s supposed to rain tonight.” I sounded like a stupid weather girl.

“Oh, God.” He tried to sit up but smiled this sweet drunken smile, then fell back in the hammock. “I can’t get up,” he laughed and moaned, like a thirteen-year-old who had just been asked to roll out of bed early on a Saturday morning.

My heart stopped beating. My breath caught in the pit of my stomach where hope and fantasy pretended I was more to him than a girl from the mountains cooking for my keep. I didn’t answer him. I went to him, leaned over and put his arm around my neck. As I pulled him up out of the hammock, his hand brushed against my breast, but I don’t think he knew that.

“Just help me get to the door, Zora.”

He said my name. The first fat raindrops splattered on us, a preview of the coming storm. I guided him toward the kitchen door. His head drooped so close to my shoulder, I felt his breath on my neck. His scent made me dizzy. When we reached the door, he leaned against the wall with his eyes closed and smiled. My heart stopped again when his hands touched my cheeks and then disappeared into my hair. He fumbled with the clip until it came undone and leaned forward to smell my hair like it was a pretty flower. Smiling, he picked up a handful, held it up to his face, and breathed deeply. Then he disappeared through the door. I could hear him ricocheting off the walls as he walked down the hall and up the stairs to his bedroom.

I wanted to follow him and make him smile again. As I turned to leave, I noticed the Styrofoam plate of food I’d set on the picnic table had a puddle of rain on top of the tinfoil. I didn’t think twice about the rules. I didn’t care. I picked it up, poured the water off the foil, and went into the kitchen. When I opened the refrigerator door, my heart broke. There were six or seven meals I had prepared. Some had taken hours to fix, and he had just shoved them into the refrigerator and never eaten them. I wanted to die.

I ran out of the kitchen and stopped just shy of the stairs to my apartment. I thought about Daddy Heyward, my second daddy, and how he passed out on our couch every single night he lived with us. I hated Mama for fussing over him like a new puppy whenever he pissed himself or worse, and hated her even more for not knowing how to love somebody who wasn’t a drunk.

A gust of wind blew the thick damp smell of summer rain hard across my face. And there was the scent of the moonflowers whose very purpose for existing was to bathe the night air with its own love potion. The combination of the two made the last few minutes I’d spent watching Winston snake around in my mind. I saw glimpses of his hand brushing against my breast and his smile when he touched my hair. I closed my eyes and remembered his earthy scent. He was more than Scotch and a pretty face; I would have bet my life on it. The rain came down hard enough to chase anyone with good sense inside. But I stood there as the downpour washed over me and convinced myself I could have him.

Be sure to check back later for my review of the book and tomorrow for my interview with the author. 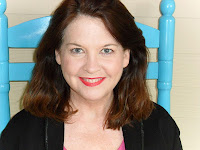 Kim Boykin learned about women and their hair in her mother’s beauty shop in a tiny South Carolina town. She loves to write stories about strong Southern women, because that’s what she knows. While her stories are always set in South Carolina, she lives in Charlotte, N.C., with her husband, three dogs and 126 rose bushes.