Blogger's Note: Before I share my review of EM Tippetts' Someone Else's Fairytale with you later this morning, here's an excerpt of novel 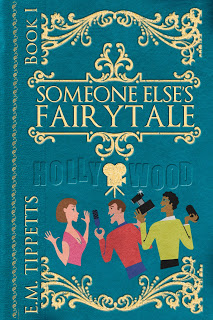 I turned around, and found myself face to face with Jason Vanderholt. He was just like his publicity shots, blue eyes, tanned skin, toned physique. He looked at me, one eyebrow slightly raised. Around him were several guys with cellphones out. An entourage.

"Hey. How are you?" He was wearing a t-shirt and holding a paper cup in one hand, which he raised to his lips. I watched him shake something into his mouth, which he then crunched between his teeth. “It's ice,” he said, with his mouth full.

The sun wasn't up yet and it felt like we were standing in a giant refrigerator. This guy was crazier than Lori.

He gave me a wry smile. “You want some?”

“Freezing. Gotta do this between scenes so my breath doesn't steam when I say lines. See?” He was right. His breath did not steam as he spoke.

He chuckled. “You look really familiar.”

“Never met you in my life.”

His eyes popped wide with recognition. “Like Chris and Beth! Okay, okay, now I know why I recognize you. You're... what? Their cousin? You gotta be related.”

My pulse edged up a notch and I wrapped my jacket more tightly around myself, as if its insulated fabric were an invisibility cloak. “You know Chris Winters?”

“Heck yeah. He was in my class in high school. His dad was my dentist.”

“He was?” My pulse edged up another notch. I felt stupid. I'd gotten after so many other people for making up tenuous connections to this guy that I'd overlooked the fact that he really was from town. Had grown up here and known people.

I shrugged. “I'll take your word for it.”

One of his team of guys put a hand on his arm and said something into his ear. “Okay,” he replied. “Chloe, right?”

He held out a hand. “Jason. Vanderholt.”

He grinned as if that was a clever, witty reply. We shook. His hand was like ice, his skin dry. I let go and he moved on down the line.

As soon as he turned his back, I sank down to the ground and gulped the rest of my hot chocolate, which was now almost cold. Lori stared at me with wide eyes. “He knows you?”

I looked at him, then at Lori, then at him again. “I don't want to talk about it. I'm sorry. My family's a little messed up and-”

Be sure to check back later, today, for my review, and tomorrow for an interview with the author!

About the Author
E.M. Tippetts grew up in New Mexico and now lives in London, where she raises two boisterous toddlers, designs jewelry, and writes novels. A former attorney, she used to specialize in real estate and estate planning, specifically literary estate planning. She currently has five novels out, Time & Eternity, Paint Me True, Someone Else's Fairytale, Castles on the Sand, and Nobody's Damsel (Fairytale 2).