Blogger's Note: Enjoy this excerpt of Shirley Hailstock's White Diamonds. Check back later, today, for my review of the book, and tomorrow for an interview with the author. 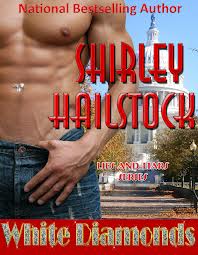 Wyatt Randolph!  What was he doing here?

His body wobbled like a puppet from side to side, forcing Sandra to compensate for his shifts. The snow pattern behind her looked as though a drunk had woven a crooked line to her door.

How she got him into the cabin she'd never know, but she had him on the table of her mother's mountainside surgery. Melissa Rutledge, Sandra’s mother, often came to the mountain to write and relax. She’d penned many of her papers in this cabin.

Now what? Sandra asked herself. She checked his eyes, lifting the lids to make sure. . .of what—that his eyeballs were still there? She'd seen it done countless times, but had no idea why anyone did it. Sandra was the daughter of a famous surgeon, a woman whose medical skills included the success­ful transplantation of human hearts. Yet she, Sandra, didn't know how to change a bandage.

She did know there was more blood on the senator’s belly than had been there before. Either she had made the wound worse by moving him or the heat in the cabin was warming him. The bruises on his face were superficial. She didn't think there would be any permanent damage to his eye, despite the fact that he looked like a monster from an old black-and-white movie. Whoever beat him had only damaged one side of his face. The other half was unmarred. Carefully she began open­ing items of clothing to reach the source of the blood. Her protected fingers worked quickly to unbutton his coat and shirt. When she should have found skin, she discovered a band around his waist.

It was a crude attempt at a money belt. Blood soaked it. She frowned, skewing her nose at the amount covering the cloth. In this storm he should have picked a different road on which to get stranded, one where there was a doctor!

Sandra glanced at his face. He was helpless, unconscious. Paleness clung to him like a death shroud. She was his only hope. Sandra went back to work, taking a pair of bandage scissors and cutting the bound cotton in two places. She lifted it away and stared at the gaping wound. Blood oozed from it. Even her untrained eyes knew he'd been stabbed and that he needed stitches.

Absorbed by the thought that she was going to have to administer to this wound, she let go of one side of the cloth she held. Suddenly, she jumped at the noise and stepped away from the shards of glass pecking her legs as they fell from the bloody cloth and danced about her feet.

Sandra gasped, dropping the cloth. Diamonds, not glass.  Huge cut stones stained the white floor, skittering about like bloody jumping beans before momentum ceased and they came to rest. Her mind whirled with questions as her eyes darted back and forth between the floor and the man on the table. What was he doing with all these diamonds? An unnamed fear rose in her throat but she pushed it down. She didn't have time for that now. At the moment she had a man who needed her complete attention.

Ripping off the rubber gloves, she dropped them in the medical wastebasket and, without lifting the receiver of the speaker phone she punched her mother's phone number at George Washington University Hospital in Washington, DC. She waited while the secretary connected her, praying silently that Dr. Rutledge was available and not in surgery.

Sandra knew surgeons could assist in operations in all parts of the world by satellite hookup. Here, in the remote Pocono Mountains, they didn't have that kind of equipment and she was no doctor, yet the man lying on the table behind her would bleed to death if she didn't get help for him. This was the best she could do. Sandra let out a relieved breath when her mother's strong voice came over the line. She was going to have to walk her through the steps that would save the life of a United States senator. Then Sandra could wonder about the diamonds on the floor. 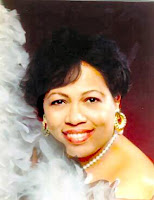 About the Author
Shirley Hailstock began her writing life as a lover of reading. She likes nothing better than to get lost in a book, explore new worlds and visit places she never expected to see. As an author, she can not only visit those places, but she can be the heroine of her own stories. A past president of Romance Writers of America, Shirley’s has authored 29 books and won many awards and accolades for her work.