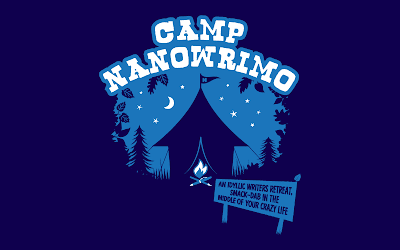 National Novel Writing Month's Camp NaNoWriMo is back -- and this time earlier than usual. The first session begins April 1 with the second session August.

After learning about this back in November or December, I was already a fan of the scheduling change. The first year, Camp NaNoWriMo happened back-to-back, which felt too rushed. Last year was better with a month off in between. But this time around, knowing there will be two months of bliss between sessions followed by a three-month break before the Big Show certainly has this writer feeling a little less pressed for time.

This week, I learned there were more changes ahead for this year's campers. In addition to offering more options for picking cabin-mates (one of my favorite features of Camp NaNoWriMo) and new merchandise (who doesn't love a commemorative mug?), they are also giving writers flexibility in their projects -- you are invited to participate as a rebel or script writer in addition to writing a new story -- and you can choose your own word count goal.

My mind was blown by this last offering. I love having the ability to track my word count on an official system, like the one offered through NaNoWriMo's websites. But, as much as I enjoy the frenzy of November, I have found it a little too challenging to produce that same word count another time during the year.

I'm still deciding on my April word count goal, but I love having this option. It'll give me that extra motivation of seeing me draw closer to my word count goal every day, while giving me more flexibility.

Is anyone else going to Camp next month?

Do you know of other websites that allow you to set writing goals to track your word count?