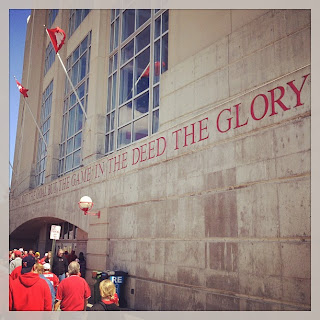 Growing up in Nebraska, I learned a few facts early on in my life.

1. Soybeans are a viable source of food and energy.
2. The Ogallala Aquifer is an important source of water, and we have to protect it.
3. Husker football is serious, serious business.

At an early age, I knew that Saturdays in fall were reserved for football. Every other day of the week or year, it was a viable topic of conversation, and one could never discuss or dissect it too much.

As a child of the 80s and 90s, I grew up during a golden era for football in Nebraska. I watched the team I -- like a good chunk of the other kids in the state -- idolized win back-to-back National Championships in 1994 and 1995. They took a year off, but came back to take the 1997 title.

Yeah, I totally watched this happen when it happened:

During the games, I knew winning was important. But thanks in part to one young man, I learned that who you are, what you do and how you face hardships is what defines you as a person. More than holding school records or a championship ring, if you are a good person, you can change people's lives long after you are gone.

When I was 8, I developed a serious crush on one of the players on the team. When Tommie Frazier, the star responsible for the play you saw above, was put on the injured list, because of blood clots, Brook Berringer stepped up to lead the team, particularly during that 1994 season. He was amazing.

Then, when Tommie was recovered, he graciously returned to his back-up status, doing what he could to support his team, even if it meant he didn't get to see much playtime.

While his legacy on the field as a talented athlete was enough to make any little girl develop a crush, it was his actions off the field that sealed the deal. In addition to being a man who defined the term team player, he was a steward of the community, reading to children at schools, visiting people in the hospital and so on. As my mom put it, Brook was the real deal. What you saw on TV and in the newspapers was what you got.

Brook was killed in a plane crash in 1996 the week before the NFL draft, where he was expected to go as a late-round pick. The news shattered our community. In the aftermath, former teammates, friends and fans remembered the young man for the way he inspired our imaginations by showing us the value of being a good person and a pillar of strength.

This video from ESPN about his life shows that:

Years later, Brook's legacy lives on. At every spring game, including the game my family and I went to this weekend, a group of outstanding young men are recognized in his honor. The Brook Berringer Citizenship Team recognizes football players who have gone above and beyond the call of duty to provide excellent leadership, involvement and service. Every year, before we cheer on the Red and White teams during the spring scrimmage, we pause for a moment to reflect on his life and to commemorate his legacy, which lives on in these players.

The players who received the honor at this year's game on Saturday certainly deserved it. When you watch this clip, you'll see why:

You can learn more about Jack Hoffman here or by visiting his Facebook page here or by reading this awesome article from my old newspaper here.

And now friends, we're going to get a little deep for a Monday morning.

After this year's Spring Game, rather than thinking about how Taylor Martinez's passing game looks, or analyzing the defense's ability to stop the run, I've been thinking about what matters most for the legacy you leave behind.

For a football player, is it setting the school record for most rushing yards in a game or is it helping make even one person's life better, because you were in it?

As a writer, what is more important to me? Is it becoming a best-selling author? Or is it writing a story that leaves a positive mark on a person? Is it being the type who helps others? These are not mutually exclusive, you can be all of them. But maybe I need to think a little more closely about what I'm doing for those last two points than focusing on achieving the first. At the very least, it's something to strive for going forward.