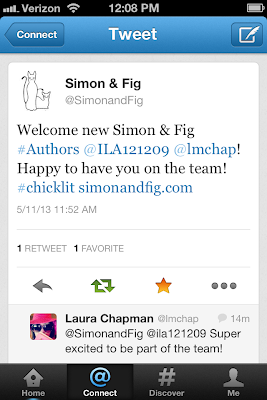 You either connected the dots, ignored it or don't follow me on Twitter, but regardless, I'm pleased to officially make this announcement:

This month, I signed a contract with Simon & Fig to release a novelette by me, Laura Chapman.

Thank you, thank you. I'm beyond delighted. I've previously alluded to this, but the novelette will be included in a winter holiday anthology scheduled for release in November 2013. We'll do an official title and cover reveal for the anthology in September.

Until then, I can share a few details with you about my story:
I am deeply honored to be included in this anthology and working alongside authors and a publisher I not only like, but admire and respect. I am thrilled, terrified and often still in disbelief that this is happening.

This is a dream come true. When I started this blog more than two years ago, my goal was to one day become a published author. I hoped to be one by 2013, and with this, it's happening. The years of dreaming, hours of writing and seemingly never-ending edits all make a little more sense, now.

Stay tuned for more information about this upcoming anthology. Hopefully, I'll have more exciting news to share with you on the publishing front soon.