Blogger's Note: I have a review of E.M. Tippetts' Nobody's Damsel coming up next, but first, here's an excerpt of the sequel to Someone Else's Fairytale. Check out an excerpt of that book here, my review here and an interview with the author here. 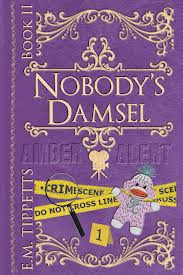 When I emerged from the van, I found myself face to face with a woman who definitely did not belong inside the roadblock. Her stance was shy and tentative, one knee bent, hands behind her back. Further down the street another front door was open and another silhouette watched us. Understanding dawned. She’d come from her house, so hadn’t been herded away in Miguel’s sweep. Her blond hair with dark roots was swept up in a casual ponytail and she wore jeans and a t-shirt with a picture of a teddy bear on the front.

“Can I just ask you what it’s like?” the woman asked.

A broad question if there ever was one. “I’m really sorry.  I’ve got to get back to work.”

The woman followed me across the street like an eager puppy.  “Wow, the media’s right about you. You’re a total snob.”

Not what I needed. I tried to make nice. “Sorry, I’m under some stress right now-”

“Because you’re going to get a divorce?”

My terse refusal to engage her would only fuel these rumors, but I wasn’t sure I could feign the relaxed happiness required to dispel them. I took a moment to remember Jason’s unreserved smile as he lay in the back of his car, waving at me, amused at how we couldn’t even be seen together for two seconds on a random street on the West Side without attracting a crowd. I remembered the way he always turned his full attention to me when I walked into the room, his gentle, caring touch, even if it was just a squeeze of my hand in passing.

“I’m not getting a divorce,” I said. “I’m stressed because this is a nasty crime scene and I’m not good with those.” It was the best excuse at hand.

The woman’s expression melted into one of sympathy. “Oh, right, of course. Because you were almost killed.”

“Some things are more important than money.”

I wished I had the same control over my features that Jason had over his, but I didn’t. I knew I let my flash of indignant outrage show. When I’d gotten engaged to Jason, I was still so inexperienced that questions about our sex life just bounced off me. We didn’t have a sex life yet, but Jason had embarked on a campaign to make ours a good one, and he did that by teasing me mercilessly. On the red carpet he’d lean down as if to whisper in my ear and nibble my skin instead. Whenever we had even so much as a second alone, he’d kiss me hungrily and break it off so I always wanted more. Soon I was biting my lip to keep from trembling every time he so much as ran a finger across the back of my neck, and when we’d reached our wedding night, I’d all but hauled him into the bedroom. Even then, he was a tease, making me wait, taking control, and looking down at me with such intensity that I’d had to close my eyes at points just to endure it.

Ever since, questions about our love life bothered me. I wanted all of it to myself; that’s what everyone else seemed to get, but for Jason’s fans, these questions weren’t the least bit off limits. They watched his movies and therefore each felt entitled to a piece of him.

“Miss Chloe, there you are.” Detective Baca leaned out the front door. “I need you-”

“Answer one question. Just one, okay?” said the woman.

She rolled her eyes. “Yeah, he can do better.”

I watched her storm back across the street with a mix of relief and annoyance. Relief because she was finally gone, annoyance because simple etiquette didn’t seem to apply to the famous. I didn’t understand why people assumed that if you had your face in the papers, you wouldn’t mind people hurling insults at you at the drop of a hat. It was as if fame made me not a real person, but a media construct, like the fictional characters Jason played.

“You just ignore her,” said Detective Baca. “She’s got no business here.”

The woman met up with the other woman who’d been watching from her doorway. They stood in the middle of the street and spoke in indignant tones, casting sharp glances in my direction.

Check back soon for my review!

**Everyone who leaves a comment on E.M.’s tour page will be entered to win a $20 Amazon gift card! Anyone who purchases their copy of Nobody's Damsel before May 20 and sends their receipt to Samantha (at) ChickLitPlus (dot) com, will get five bonus entries.**

About the Book
Chloe has finished her masters degree and taken a job as a forensic scientist back in her home town of Albuquerque, New Mexico, only the press will not leave her alone. They follow her to crime scenes and report on her every move, eager to show that her marriage to Hollywood A-lister, Jason Vanderholt, is on the brink of collapse. Millions of fans who dream of their own celebrity romance with him want this more than anything. This scrutiny comes at a particularly bad time as Chloe's first case is a crime against a child roughly the same age that Chloe was when she survived a homicide attempt.

Now that she sees the case from an adult's perspective, she realizes it's much harder than she ever dreamed. It's even worse for Jason, who is two steps removed from the crime. He must watch and try to support his wife as she battles with past demons and tries to keep up with a nameless suspect who evades identification and capture. Never has Jason been more frustrated with his job, its frivolities, and its lack of connection to the real world. When he storms off the set of his latest movie, the press goes wild with conjecture. Perhaps he never was anything more than a pretty face after all.

Together, Chloe and Jason must find their way past all the popping flashbulbs and through the dark maze of the criminal investigation to discover whether they can balance their professional goals with the demands of a celebrity marriage. The odds are entirely against them.

E.M. Tippetts grew up in New Mexico and now lives in London, where she raises two boisterous toddlers, designs jewelry, and writes novels. A former attorney, she used to specialize in real estate and estate planning, specifically literary estate planning. She currently has five novels out, Time & Eternity, Paint Me True, Someone Else's Fairytale, Castles on the Sand, and Nobody's Damsel (Fairytale 2).

Connect with the Author