Blogger's Note: During my travels the past few years, I had the opportunity to visit various booked-related hot spots. Originally posted on my now-defunct blog, Lit Adventures, this is one of my Literary Adventures. Enjoy.


Before visiting Seattle, thoughts of the Fairmont Olympic Hotel made me weak in the knees remembering the sexy interludes between Christian Grey and Ana Steele during E L James Fifty Shades Darker.

Fans will recall, Christian and Ana flee Escala, his luxury apartment in the middle of the night after a close call with a stalking suicidal ex-sub to stay at the swanky hotel in downtown Seattle. There, the two proceed to do what they do best: get sexy. It's also the first of many times they "make love" in the books, but because that phrase makes me seriously uncomfortable, I try to push that part out of my thoughts.

While in Seattle, I decided to check out a few of the Fifty sites, and after seeing the Fairmont Olympic, my thoughts went in a different direction. Namely: Why the hell did Taylor put Christian and Ana in a hotel a few blocks away from where they lived? 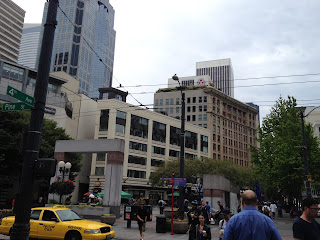 It's a five-minute walk from Escala and the hotel, which I was appreciative of as someone who had parked her car for the day to explore, but as a normal person I can't help but think it was a waste. A waste of time, driving north on I-5 to lose the ex-sub. A waste of money to pay a valet to park your car, when it's so close. And a waste of hiding, unless you subscribe to the "hiding in plain sight" rule of thumbs.

I know Christian makes a bunch of dough, but he also hates waste, and that seems wasteful. But I suppose he values Ana's safety more, so who am I to judge. And frankly, what's wrong with me that I have spent so much of my time, and this blog post, analyzing this?

Maybe all of the other hotels in Seattle were booked. Ana didn't bring this up with Taylor or Christian, so I guess we'll never know. Taylor is nothing if not a pro, so who am I to judge him?

All that aside, staying at the Fairmont Olympic was definitely out of my price range at more than $300 a night for a room, but making a quick walk by was worth the time. Like Escala, it is mere blocks away from Pike Place Market, a must visit if you are in Seattle. It, along with the other buildings in the downtown area, isn't hard on the eyes.

During my walk, I passed through a nice little park and even saw what must be the offices for AllRecipes.com. On another trip, maybe they'll let me stop by so I can thank the staff for their hard work keeping me fed (and blogging for Reading in the Kitchen).

After checking out the Fairmont Olympic website, it's clearly a nice place to stay and might be worth the dough if you have it to spend, like Mr. Grey. But, if you're an aspiring author like me, I'd suggest staying across Lake Washington in one of the suburbs and driving into town early and walking by.

And, after looking at the website and drooling in envy, I can understand why Mr. Taylor booked his boss a room there. I'm sure he would get no complaints from the super picky Mr. Grey. I know I wouldn't be whining about having to take sanctuary there for a night.

Who knows? Maybe I'll become the next E L James, and I'll be able to take out a Cascade-suite like room for myself?